Tiny Habits: The Small Changes that Change Everything 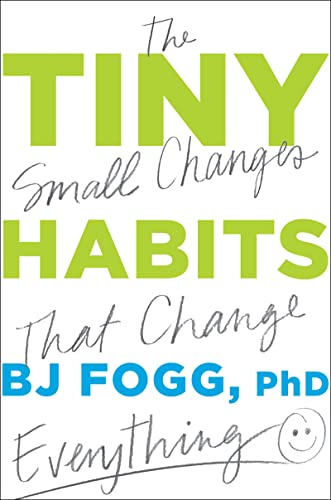 “The book reads like a late–night infomercial touting a miracle gadget, more like the operation manual for a new car than a step-by-step guide. It asks too much of the reader.”

The high reputation of B. J. Fogg is at odds with this breezy book. Dr. Fogg is founder and director of the Behavior Design Lab at Stanford University and a respected academic. The press releases accompanying this book explain that “Behavior Design is a new and effective way to understand human behavior and change it.”

What follows is confusing, however. The book reads like a late-night infomercial touting a kitchen gadget. Clip art figures and graphs like the kind you hated in high school interrupt the text on nearly every page and do nothing to clarify whatever idea the author is trying to convey. The same goes for annoying call-out boxes and pages of flow diagrams mean to summarize decision algorithms.

In terms of fragmentation and overload, the book feels more like the operation manual for a new car than a step-by-step guide for replacing old habits with desired ones such as losing weight, getting more sleep, flossing regularly, or taking up exercise.

Jargon abounds: B = MAP, Focus Mapping, Motivation Wave, Pearl Habits, Magic Wanding, Shine, Golden Behaviors, Anchors, PAC person, and more. Readers are expected to remember what these made-up terms mean. Plain English would have been preferable. To succeed a great deal of effort is required, too: Make index cards, Draw Pictures, Sort Cards, Make Lists (lots of them), Write Down, Journal, and come up with Pac Person Prompts. It makes the eyes glaze over.

The book simply asks too much of today’s readers who are already stressed and short of time. “With practice,” says the author by way of example, “I learned to Magic Wand a Swarm of Behaviors very quickly.” But then he says that the task took him 20 minutes. How many readers would be willing to do the exercises and commit such time on a daily basis in order to budge them out of ingrained habits?

Perhaps no amount of Behavior Design can overcome an attitude of, “I just don’t feel like it.”

Fogg helpfully acknowledges that knowledge alone never leads to lasting changes. If it did, then no one would be overweight, smoke, or neglect exercise. And yet millions of people do just that.

One tiny habit Dr. Fogg illustrates as a way to exercise more is “after-pee pushups.” That is, each time he urinated he would do two pushups against the countertop. With time that tiny habit led him to do more pushups, and eventually more exercise in general. Soon he had a regular fitness routine that he practiced and enjoyed.

I tried Fogg’s prescription, but each time I set my mind to it I simply forgot to do the pushups. The book has a remedy for this because it knows that “just forgetting” is common: practicing a Crafting Skill, a Context Skill, a Process Skill, a Mindset Skill, and a Self-Insight Skill. But at this point who can remember what these are let alone how to implement them? Weeks passed by without my doing any pushups at all.

Nonetheless cheering readers on, Fogg insists that changing “your habits and your life . . . is easy—and even fun.” But it’s frustrating. He relentlessly prods readers: “Don’t just read this book—practice the skills of change.” It would be easier to heed the author’s advice if the exercises and techniques didn’t feel so unnatural. They impose a layer of work over daily life—and a complicated layer at that.