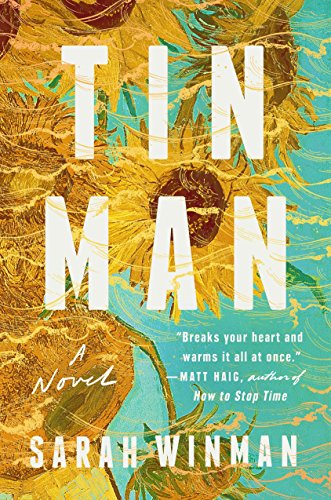 Sarah Winman's third novel, Tin Man, begins in 1950 in rural Oxfordshire, when a pregnant housewife, Dora, disobeys her husband by choosing a painting over a bottle of whisky at a charity raffle. The painting is a reproduction of Van Gogh's Sunflowers, which will come to represent many things for the characters in this poignant novel; freedom, beauty and destiny.

Tin Man follows the life of Dora's son Ellis and his best friend Michael. Growing up working class in England in the ’60s, these sensitive young men often face barriers to their true desires in life, whether it be perusing art, travel, or a romantic relationship with each other.

Later, through Michael, Winman will explore the aids crisis in London in the late ’80s and early ’90s, reflecting the relationships between gay men as many of their community died, and the relationships those men had with their families, friends, and neighbors.

The first part of the novel is titled Ellis, the second Michael. Winman describes the life of Ellis, a widowed 47-year-old man living alone and working in the same car factory as his father did. We will find out that his father forced him to take an apprentice at the factory instead of perusing his dreams of becoming an artist. His father has what we would now call a bad case of toxic masculinity, and is rough and bullying with his son, who as a child idolizes him. Elis likes to watch his father shave, lost in the ritual by the sink, the tap of the razor in the sink comfortingly familiar . . .

“And once, in that sweet state of completeness, Ellis reached out and held him. A brief moment of ownership before his father’s grip tore into his arms and wrenched them away, before the sound of a door slam instantly replaced the tap tap tap of love. And Ellis remembered thinking how he would have given anything to have been like his father, anything. Before the pain of that memory stopped him reaching for it again.”

Dora, his mother, prizes art and beauty and encourages her son to value these things, too. Michael enters his life when he moves to the area to live with his grandmother Mabel after his mother dies:

“For years later, Mabel used to say that Michael came with the snow because that was the only way she could remember the year he moved in with her. January '63, it was, thought Ellis. We were twelve. Thereabouts.”

The boys are soon inseparable, helping Mabel in her shop and discussing art and history with Dora. When the boys’ fascination with each other later becomes physical, Winman has a lightness of touch and simplicity to her words that evoke the sense of discovery, outside of labels such as straight or gay.  Later, Ellis will reflect on:

“. . . those moments from youth, when they raced back to an empty room and nervously explored the other's body in a pact of undefined togetherness that would later bring him equal shame, equal joy.”

Those sunflowers are present through Tin Man's story of love, both that between Ellis and Michael, and the love between Ellis and his wife Annie. Years after his mother’s death, Ellis will look up at that picture again:

“He stopped in front of his mother's painting and wondered, as he so often did, what she'd been looking for. He found the painting peaceful, so could it have been as simple as that? Peace? He didn't think so, but some mornings, when light fell on the canvas, the yellow did something to his head. Woke him up, made him feel brighter. Was that it, Mum?”

Winman also paints pictures with her words, her descriptions of lovers and summers both sensuous and evocative. Simple and earthy pleasures run through the book; Spaghetti Vongole and wine in a garden, pastis and salty skin by the sea, a bowl of water and lavender to soak the feet, bread and cheese chewed through exhaustion at the end of a long walk in heat. Her prose feels romantic yet unfussy and authentic. Michael describes the trip he and Ellis take to France in their youth:

“As night fell, we bunked down in our cramped sleeper. Ellis sketched and I read. And I could hear his pencil moving across the page, and I felt so excited for him and for us, and every now and then a cheese baguette and a cup of red wine yo-yoed between us, and we felt so sophisticated, we really did . . .

“We were in our bar down on the beach, drunk on a cocktail of Pastis and Francois Hardy, and it was late, and we could hear glasses being collected behind us.”

The decisions that are made on this trip will have a big impact on their relationship. Their intimacy abroad will later be buried, and Winman deftly describes the denial that can exist between those so close to each other:

“In seven years, France has changed in our storytelling. It is now a holiday of single beds and single lads, sunbathing and French beauties. We keep secrets from each other about sexual adventures, who's done what. They're secret because we don't know what to do about the thing we were. So we stay away from it and don't touch it, in case it stings. Avoidance is the dock leaf.”

As a writer, Winman avoids cliché. She is a sensitive and nuanced writer who reflects the surrounding class and culture of her characters and the times in which they live with a soft touch. Ellis and Michael are boys in a small working-class community and experience the limits of expectations, but there are never any caricatures or clichés. She doesn't rely on clunky cultural signifiers.

Perhaps it is the slightness of the book (coming in at 200 pages) but in some respects it feels like we don't truly know the in depth, nitty gritty of her characters. Annie, Ellis' wife, is barely given any personality, beyond apparently being sort of sweet, spontaneous, and quirky.

Later Ellis, lonely, older and grieving, feels hollow, not a complete character. Perhaps this is purposeful, given the title. However, it means Tin Man ultimately doesn't have quite the impact it is reaching for.

At only 200 pages, it still reads like an epic. However, to this reader, when it finishes, it felt like Tin Man should only have just begun. Obviously threads left unanswered and mysteries remaining is common and indeed often desirable in literature, but Tin Man feels unfinished. Those beautiful scenes, painted in unsparing language, somehow require a little more depth.