A Time of Scandal: Charles R. Forbes, Warren G. Harding, and the Making of the Veterans Bureau 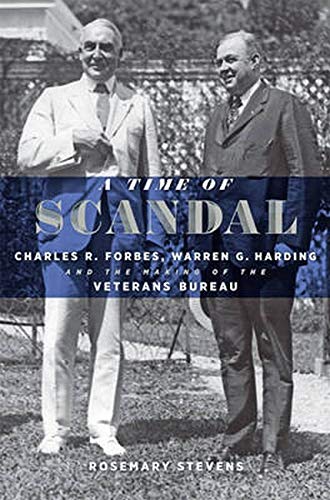 We elect our leaders with a hope and a prayer. We generally do not know much about these men and women, except as they reveal themselves during a campaign. Despite our professed efforts to vote based on policies, in fact we are moved by slogans, advertisements, and appearances, not very salutary predictors of the performance to come. Although all elected officials demonstrate some weaknesses, many perform their assigned tasks quite admirably.

President Warren G. Harding is generally regarded as an inept leader who was elected because he looked like a president. Perhaps his greatest failure was in selecting the men who would run his government. We are most familiar with Albert B. Fall and the Teapot Dome scandal, but the unhappy story of Charles R. Forbes, the first director of the Veterans Bureau, merits our attention as well.

Professor Rosemary Stevens has produced what is certainly the definitive work on Forbes in A Time of Scandal. She is inclined to favor the conclusion that Forbes was more incompetent than he was corrupt. Without the necessary organizational skills and background, Forbes was charged with the formidable task of combining three federal organizations that supplied services to veterans into a single structure and then building the largest nationwide medical system ever proposed.

He was afflicted with the “friendship” of an expert con man, Elias Harvey Mortimer, who would become his chief accuser before Congress and in the criminal courts. Eventually, Forbes would spend eight months in jail, convicted of a conspiracy to defraud the United States government.

The Roaring Twenties was a time of extreme transformation in American society. For those who had served in World War I, there were physical and psychological challenges that could not be faced without the assistance of the government they had served.

Hundreds of thousands of veterans returned to the States as casualties of war. Forbes was committed to helping these broken men. With money to spend, it was no wonder that the Veterans Bureau would become an object of desire for those who wanted to share in the largess. The shortest route was to corrupt Director Forbes. He did not fight hard against these entreaties.

Stevens’ book offers a detailed exposition of Forbes’ road to ruin. Often there are too many details in her account, and there are over 40 pages of notes and citations that evidence her scholarship. She starts the book with a “Cast of Characters,” a useful guide to the persons who will come and go throughout the text. She ends the book with a timeline, recounting the events she covered so well.

Professor Stevens’ retelling of Warren Harding’s Time of Scandal offers an instruction manual for those who fear the worst from the current “gang” in the White House. The first hundred days of the Trump Administration has raised the public’s vigilance to the highest level of precaution. We have seen the constitutional right of assembly energize those who must remain watchful if we are to avoid the worst of times that may lay ahead

A book about Charles R. Forbes and Warren G. Harding may prove useful to observers of the current political morass in Washington. No one can claim that the voters of America were not warned about our vacuous and mendacious new president. While some Trump voters may claim belatedly that they did not believe he actually would do what he had promised, they heard his message and have seen the chaos. When they lose their medical coverage and witness the erosion of constitutional rights, they will have no one to blame but themselves.

The Trump Administration is poised to create record-setting corruption rivaling the Harding Administration with our leader demonstrating to underlings and family how to go about accumulating wealth beyond measure from their “public service.” The White House bully has silenced any potential Republican critics who are afraid of his Twitter retaliation. The Democrats seem enfeebled in the face of evil incarnate. Only the judiciary has stood up to the existent threat to our democratic traditions.

Will the Trump scandals actually rise to the Harding level of perfidy? Trump has picked a cabinet of billionaires and retired generals. Can this “Cast of Characters” superintend the principal star? The man who became famous by telling contestants on The Apprentice that they were “fired” will be hard to control.