The Time Has Come: Why Men Must Join the Gender Equality Revolution 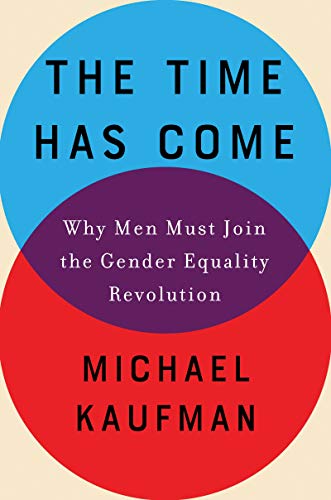 “it is difficult to overstate the importance of the perspectives and arguments that Michael Kaufmann offers in The Time Has Come.”

In The Time Has Come: Why Men Must Join the Gender Equality Revolution, author Michael Kaufman’s goal is simple: persuade other men that their voices and efforts are needed to help advance the cause of women’s rights and equality in the U.S. and around the world. For too long, he argues, the burden has been on women to do the hard work of pushing for equal pay, equal treatment, and equal influence in society. It’s now time for men to step up and do the hard work of listening, learning, and acting to promote gender equality as well.

Throughout the book, Kaufman’s tone and prose is direct and firm, yet also respectful in a way that is intended to positively persuade men to be part of the solution instead of disparaging them as the irredeemable source of the problem. Each chapter focuses on a different aspect of gender equality in society and Kaufman does an excellent job of explaining, in layman’s terms, how macro-level historical, social, religious, and economic forces have contributed to the norms and culture of gender roles in modern society that everyone (women and men alike) internalize as part of their upbringing and socialization.

Kaufman introduces this argument in Chapters 1 and 2, using examples and powerful anecdotes to illustrate the various ways (both big and small) that women are treated differently in society in ways that lead to disadvantages (both explicit and subtle).

In Chapter 3, he then explains in layman’s terms the difference between sex and gender and the effect of “social construction” on shaping societal gender norms. Modern gender roles are restrictive for women but limiting for men as well. How many men, he asks, have felt the pressure to conform to be what society defines as a “real man,” tough, aggressive, competitive, showing no pain or vulnerability, etc.? Men, he argued, should be just as invested as women in challenging these gender roles, because it will ultimately lead to more freedom and choice for them as well.

Chapter 4 focuses on gender equality in the workplace. Along with Appendix 3, this chapter is important in that Kaufman provides a helpful explanation to his male readers about things that they sometimes do at work that can inadvertently make women feel uncomfortable (e.g. standing too close while speaking, giving a friendly pat on the shoulder, etc.).

He explains important differences in mentoring and networking opportunities that can often adversely affect women. Employers and supervisors are provided with helpful questions to ask about their workspaces to help make them as open and productive for women as possible, including the availability and generosity of parental leave policies and family-friendly scheduling.

Chapter 5 then turns to parenting and fatherhood. Again, Kaufman makes an argument for equal share of work both from a fairness perspective but also with a positive “win-win” framing for men: If men were to do half of the care work, women would be free to do half of the paid labor work, which in turn would result in men having more time to spend with and bond with their children.

This is especially important, Kaufman argues, because of the strong role modeling effect that parents have on their children. Sociology and psychology research has shown over and over again that children internalize strong cues about how to behave from their parents and especially their same-gender parent. Young men and boys who see their fathers do their fair share of childcare and household work will be more likely to do the same when they are adults. Young girls, in turn, who come from homes where parents share their household work more equally are more likely to aspire to higher levels of education and higher paid work as adults.

While Kaufman does not wade too deep into partisan politics, it is difficult to read this book independent of the context in which Americans have recently elected a U.S. president who openly and shamelessly mocked women for their appearances and menstrual cycles and who dismissed comments where he bragged about sexually assaulting women on multiple occasions as mere “locker room talk.” A few years later, polling research is now showing that sexism is a strong factor that is weakening support, among Democratic primary voters, for female candidates in their quest for their party’s nomination.

Given this contemporary context and reality, it is difficult to overstate the importance of the perspectives and arguments that Michael Kaufmann offers in The Time Has Come. Our children are watching.