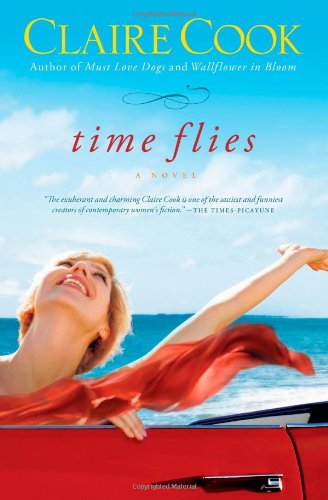 “. . . an absorbing and humorous look at lives lived during a particular era.”

Claire Cook never fails to entertain with her humorous yet insightful novels. Such is the case with Time Flies. This fast-paced tale digs deep into relationships— especially women’s friendships.

When Melanie’s decades-old marriage with husband Kurt crumbles, she is angry yet terrified—angry at Kurt for leaving her for a younger woman and terrified of an uncertain future. Now alone in Atlanta, with her two grown sons living on their own, hundreds of miles away from her home state of Massachusetts, she realizes she must make changes.

A metal sculptor, Melanie takes out her anger on her marriage bed by slashing it apart with a chain saw in order to use the inner springs for her latest creation. But she also suffers from sudden panic attacks about driving that hinder her attempts to get out and about.

Best friend B. J., aka Barb, who still lives in Massachusetts, begs Melanie to attend their high school reunion. She sends amusing emails giving what she thinks are valid reasons why Mel should go. Though Mel misses the sea and salt air, she rejects the idea of attending. Kurt too, was their classmate, and she dreads hearing false sympathy from others over their breakup.

Melanie starts receiving emails from Finn, a geek from high school who had a wicked crush on her back then, giving her a reason to rethink her decision. Suddenly Atlanta feels smothering. She decides to attend her reunion after all.

Time Flies juxtaposes present day worries with the carefree days of high school. Melanie and B.J. reminisce not only about the songs from the late 60s and early 70s, but also the attire, make up, movies, and fads. Traveling in B.J.s vintage red Mustang from Boston to Cape Cod, and while sharing their past, they decide to live recklessly—most notably by getting tattoos.

Time Flies is a tale sure to bring readers of the Baby Boom generation down memory lane.

The author’s use of vernacular is spot on. Note the Massachusetts slang:

“A record scratched on a turntable somewhere, and Alice Cooper broke into ‘School’s Out.’ ‘Wicked pissa song,’ Kurt said.”

In addition to singing favored old songs, the women imagine themselves as the stars of Thelma and Louise, deciding to commemorate their teen years by living dangerously.

More than a beach read, Claire Cook’s Time Flies is an absorbing and humorous look at lives lived during a particular era. We acknowledge that time does fly, but lasting friendships can continue to enrich our lives long past the moment they were born. The author’s facility with setting evocative scenes past and present is refreshing, and using totally riveting prose, she creates a tale women especially will enjoy.