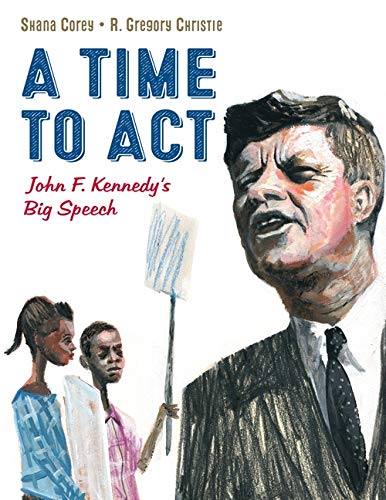 The new picture book by Shana Corey called A Time to Act: John F. Kennedy’s Big Speech focuses on the story behind John F. Kennedy’s speech about Civil Rights and Equality. But Ms. Corey does not tell it in the typical “he bravely did what was right and did not care what anyone thought” way that most hero stories are told. She tells it as it unfolded, showing how Kennedy—for all his power, influence, and prestige—was  actually hesitant about speaking up for equality because he did not know how his actions would be received.

The book opens with a bit of background on John F. “Jack” Kennedy; how he wasn’t the favorite of his family, and in fact was not even a great student. Yet the untimely death of his older brother thrust him to the front of the line to fulfill his father’s dream—that one of his sons would become president of the United States.

As Jack proceeded to run, African Americans were staging sit-ins and marching for equality. But though one of Jack’s speeches was that “the aim of the next president of the United States must be to achieve equal opportunity for all Americans regardless of race,” he really didn’t do a lot to change things. He did work secretly to help free Dr. Martin Luther King, Jr. when he was arrested after participating in a sit-in, and he established the Peace Corps and even spoke the words, “Freedom is indivisible; when one man is enslaved, all are not free.” But according to Ms. Corey, “on important issues, Jack was slow to act.”

This slowness persisted. Freedom Riders were attacked as they tried to integrate buses and Dr. Martin Luther King, Jr. asked Jack to help outlaw segregation, but Jack did nothing. Until the day black children and teens left their Birmingham, Alabama classrooms to march peacefully to end segregation. When they were blasted with water hoses and beset upon by vicious police dogs—and when their ordeal was blasted all over the news, Jack finally acted. He went on television and said, “This nation . . . will not be fully free until all its citizens are free . . .”

This is a timely and relevant book, not only because it is a slice of real American history, but also because it is a prime example to children everywhere that sometimes it takes a while to find the courage you need to do the right thing . . . but sooner or later you find it.

Corey’s prose rings natural and true, and will definitely feel relatable to young teens and ‘tweens who are seeking to define themselves and their principals. Artist R. Gregory Christie’s illustrations of children with elongated necks and determined faces courageously carrying the signs that demand equality all help to loan a collage-ish look and feel to this important book. Use this to teach tolerance, equality, integration, social studies, and the fundamentals of American laws.