Tiger Woods's Back and Tommy John's Elbow: Injuries and Tragedies That Transformed Careers, Sports, and Society 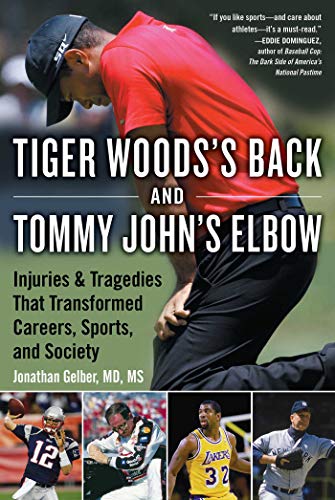 “Dr. Gelber adds to his account of sports his articulacy in medicine. That is what makes this work notable.”

Dr. Jonathan Gelber is an orthopedic surgeon who specializes in sports medicine. His new book, Tiger Wood’s Back and Tommy John’s Elbow, demonstrates the best of interdisciplinary, nonfiction writing. It is evident he is fluent in the business of sports; he knows football, baseball, basketball, and auto racing among other sports. Many authors do, but Dr. Gelber adds to his account of sports his articulacy in medicine. That is what makes this work notable.

Gelber’s account is filled with descriptions of current medical and statistical studies on a wide spectrum of diseases, epidemiologies, and surgeries. For the most part, it is literature with which even the informed reader is unfamiliar. His explication is stated in language that is easily accessible and provides thoughtful insight into the nature of sports.

The book’s penultimate chapter on Tiger Woods’s medical treatments exemplifies the scope of Dr. Gelber’s splendid research and writing. Woods is the most famous golfer of our time, an icon of one of the world’s most favorite pastimes. His majestic swing, however, caused serious back injuries that required numerous surgeries, described in detail by Dr. Gelber.

Woods also became addicted to pain killers and other prescriptions that might have allowed him to return to the links. He spun out of control, much to the great disappointment of golf aficionados. Here, Dr. Gelber focuses on the relationship between sports, surgeries, and prescription medicine. The story ends on a positive note with the 2019 Master Tournament when Woods returned to claim another green jacket and, hopefully, the affection of the sporting public.

Let’s consider a number of other examples. Dr. Gelber’s chapter on Tommy John’s surgery includes a short course in how the arm works. He demonstrates his facility in performing the surgery itself and explains how the procedure became ubiquitous. Tommy John’s surgery has spread to youth sports injuries and has reached epidemic proportions. The unintended consequences of its popularity have resulted in many unnecessary procedures.

In another chapter, Gelber examines Magic Johnson’s announcement that he had contracted AIDS, an event that had a profound effect on the public. It impacted attitudes and behaviors about the contagion. Magic was the face of the epidemic, and his declaration had a positive effect on public perception and public health.

Gelber analyzes the National Football League’s effort to keep quarterbacks off the injured list. Football is a collision sport with foreseeable prospects for injury. In fact, on average a player will miss one game a year because of injury. At the same time, quarterbacks are the prime attraction of the modern game. When a club loses its pass thrower to injury, normally the season is lost. Gelber’s focus is primarily on the statistics of injuries, although he does not talk about the primary threat to the current game caused by the long-term toll of concussions.

Reading nonfiction requires trust. We know that fiction is imaginary, an invented story. By comparison, nonfiction is supposed to be about something that really happened. The author of nonfiction vouches for the truth of what is written.

Classifying a narrative as fiction or nonfiction does not mean the work is well-written or worth your time as a reader. Both fiction and nonfiction can be glorious or rubbish. The difference between the two forms of narrative is based on the author’s intentions and the reader’s confidence in the reliability of the account. Dr. Gelber’s book is written by an expert. His discussions are informed and would interest anyone interested in sports and medicine.