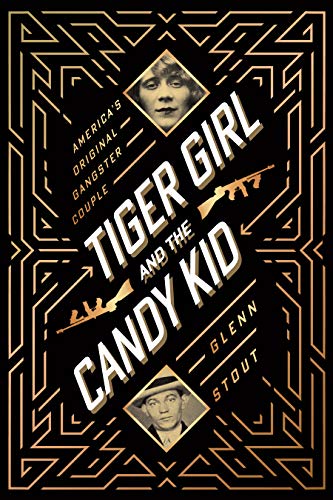 “For the reader who is intrigued by America’s romance with gangsters, Tiger Girl and the Candy Kid is definitely worth spending time with a couple who, for just a short time, lived their wild dreams.”

For some unusual reason, crime stories always seem to grab the public’s attention, and add into that mix gangsters and the Jazz Age and the result is a story one can’t put down.

Margaret Whittemore (nee Messler) and Richard Whittemore were in love from when they first met as kids in a rough Baltimore neighborhood. Call it destiny or fate, they were meant to be together. Author Stout uses this relationship as the foundation for his story, and it carries through the entire book.

Richard, raised in a respectable family, went afoul of the the law early on. As the Jazz Age began to blossom, Richard and his sweetheart, Margaret, like many young people around them, accepted the wild, raunchy life unfolding before them, as one of entitlement.

Stout goes into strong detail regarding the backgrounds of Richard and Margaret, and how they began their move into the darker realms of society in order to meet the demands of the Jazz Age. “When they married, the Whittemores had been a couple of nobodies, but in New York the opposite was true—they were somebodies so important that they could live by rules they made up as they went along.”

Richard, soon tagged “The Candy Kid,” recognized quickly that he would never accomplish his goals by working a 9–to–5 job and Stout’s research details Richard’s plans to improve his position.

Set in the 1920s, the story of how this couple came to be reflects the early growth of the gangster story in America. Although primarily set in New York, cities across America play a large part in the story—Cleveland, Baltimore, and Buffalo each experienced the crimes committed by the gang.

The book is well organized, explaining how other criminals came into Richard and Margaret’s life and how these others either followed or laid out plans to lead the couple down the crime path. The research frequently takes the reader through the history of the other characters who became part of the “Whittemore Gang” and how well organized their “hits” were.

But the criminals were not the only characters outlined by Stout. He describes the numerous police officers, prosecutors, and even governors whose involvement with Margaret and Richard played such an important role in their capture and prosecution throughout their short crime spree. It was clear to these men that “if they wanted to keep their jobs, they had to find out who was responsible” for the crimes committed in their backyards.

The descriptions and backgrounds laid out for the reader indicate the widespread roles each of these characters played in the planning, execution, and prosecution of each of the crimes, whether theft for money or theft for gems—even, in some cases, murder.

While there is more focus on Richard’s role in the story, Stout makes it clear that as a couple “Their story brought all the excesses of the Roaring Twenties to life, sprinkled with a heavy dose of immorality and a dash of danger and romance. . . . Their story had everything: sex and romance, love and diamonds, death and blood, lowbrow lives mixed with highbrow living fueled in equal measure by dreams and desire and greed and fantasy.”

One of the more intriguing aspects of the story is the treatment by the press and the resulting admiration by the public. This was often true when Margaret received more than her fair share of attention. Now referred to as “Tiger Girl” because of her devotion to, and defense of, Richard and her growing place as a celebrity in the 1920s, the media could not get enough of her. “Young women now looked at Tiger Girl and saw a woman they wanted to be—head over heels in love and full of passionate devotion.” Upon Richard’s arrest for one of his many crimes, Margaret took on a whole new life in the eyes of the public. “Most, like the Baltimore News seized upon the story by its newly exposed heartstrings: ‘To see her, dubbed the ‘Tiger Girl’ . . . lose control and sob on the shoulder of her gangster husband was enough to touch the heart of Detective Sullivan, his captor . . .’”

And yet Stout brings the story to its obvious and expected conclusion with the reporting of several trials—the one Richard basically won in Buffalo, and the one he definitely lost in Baltimore. In spite of the verdict, Margaret and Richard remained at the hearts of the public, and the newspaper editors had to recognize “the pull of stardom, and ambition more powerful than wealth or achievement . . . Tiger Girl and the Candy Kid had leapfrogged their station in life to become celebrities, and that was what their readers wanted for themselves—to be seen and recognized, to seize a small piece of this new American Dream just coming into focus.”

After the final scenes and the demise of the Candy Kid, Stout ends the story with an epilogue that goes on to explain the lives of the other characters, which ties up the loose ends nicely.

For the reader who is intrigued by America’s romance with gangsters, Tiger Girl and the Candy Kid is definitely worth spending time with a couple who, for just a short time, lived their wild dreams.