Tibetan Yoga of Movement: The Art and Practice of Yantra Yoga 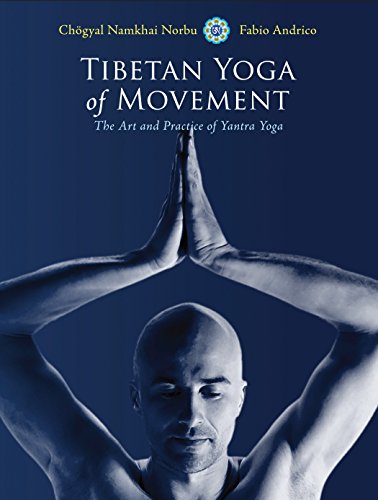 “A practice that helps coordinate body, energy, and mind while making us more balanced and free from tension is immensely important,” writes Chögyal Namkhai Norbu, author of Tibetan Yoga of Movement. He decided to teach Yantra Yoga because it is something anyone can find beneficial, and it can bring more compassion and understanding among people.

His coauthor Fabio Andrico states, “This book was written in response to the need for a comprehensive guide to the basic level of Yantra Yoga. It is based on the translation from Tibetan of the original eighth-century instructions for Yantra Yoga and Chögyal Namkhai Norbu’s extensive commentary.”

Tibetan Yoga of Movement deliberately focuses on the aspects of the practice that are readily accessible to everyone, independent of their views, ideals, aspirations and capacities. The book provides clear instructions for the practical application of all the practices, drawn from four decades of teaching Yantra Yoga in the West.

Every practice is demonstrated with color photos, and detailed information is given regarding postures, breathing techniques, movement repetitions, transitions, health benefits, and suggested warmups.

Yantra Yoga is a highly evolved method of movement and breathing that has been preserved in its original form since the eighth century, when it was first brought to Tibet by Padmasambhava, the legendary master who introduced Buddhism there. The purpose of the practice is to warm up the body, to train the different aspects of the breathing, and to open the body’s energy channels.

A typical session of Yantra Yoga consists of warmup exercises followed by the practice of nine purification breathings, three groups of preliminary exercises (Tsigjong, Lungsang, and Tsadul); at least one of the five Yantra series; a pranayama exercise such as rhythmic breathing; and finally the Vajra Wave.

In Tibetan Yoga of Movement all traditional Tibetan terms are explained, and plenty of alternatives are given for length of practice, depending on the experience and condition of the practitioner.

The nine purification breathings are done to exhale stale air and to expand the body’s capacity for breathing. Tsigjong, Lungsang, and Tsadul help warm up the body, train the breathing and balance one’s energy.

A Yantra Yoga session concludes with a rhythmic breathing practice to give space to physical energy and the mind so one can relax and progress in a steady and harmonious way. Lastly, the Vajra Wave is done to clear any lingering obstacles to one’s breathing and energy.

The authors encourage exploration of the spiritual aspects of the practice by seeking a qualified teacher rather than reading a text. In Tibetan Yoga of Movement, they masterfully present the basic level of an intense practice, so that yoginis of all levels of experience can find both challenge and ease in Yantra Yoga.

The book includes an appendix of pre-practice warm-ups for moving the spine in all directions, from standing, seated, reclining, and downward facing positions.

Seven practice routines are outlined in varying timeframes. Short and full versions of Tsigjongs, Lungsangs, Tsaduls, and Yantras are provided as well. There is also an index of health benefits, listing specific Yantra Yoga practices to address various health concerns.

Tibetan Yoga of Movement is highly recommended for anyone who wants to focus on opening, restoring and nourishing the interaction of breath, body and mind, bringing things into balance for physical and psychological health and wellbeing.