The Thursday Murder Club: A Novel 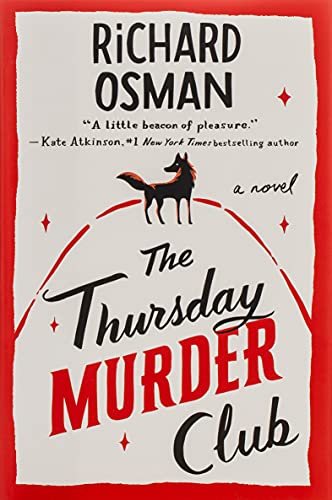 “Osman has done an outstanding job of bringing his characters to life and making them as individual as if they were real.”

According to The Smithsonian, a spider begins to spin its web “from the outside and works its way in . . . ending with a center spiral of sticky silk that traps much-needed prey . . .”

That being the case, it is clear that Richard Osman, author of The Thursday Murder Club has some spider DNA in his genes. He starts with many characters, each taking their own turn at building the web, until he brings us to the center where the true culprit is caught.

Four elderly persons living in the retirement community, Cooper’s Chase, while away the hours every Thursday when they meet and discuss cold case files, attempting to solve the crimes the police could not.

Each brings his or her own skills and background to the group: Joyce Meadowcroft is the last to be invited to join, and she seems to have taken on the unofficial role of scribe as she writes about the club’s events and activities in her journal; a journal she shares with the reader.

And then there is Elizabeth, whose background is a little murky. She has contacts in the government underworld, contacts that come in handy as the story progresses. Her past life role is not clearly explained, but the insinuations are there.

“Red” Ron Ritchie, an activist in his younger years, who has been speaking his mind for decades, brings his energy to the group; and Ibrahim Arif, a retired therapist sets his mind to learning about the people in the cold case files. This is indeed a team worthy of the Thursday Murder Club.

It’s a relatively quiet group, intense in their studies, until Tony Curran is murdered. Tony, a minor partner with Ian Ventham (a property developer of the retirement community) is fired by Ian, and the questions of Ian’s guilt in Tony’s death begin to fly around the community.

Enter PC Donna De Freitas, a woman in a man’s world of policing, and she has begun to develop a relationship with the club members. They like her. And they want her to participate in the investigation. Chris Hudson, the detective heading up the investigation, feels he has enough team members, and Donna is just fine bringing them coffee.

Elizabeth, with her hidden contacts, changes that, and Donna is brought onto the team. The Thursday Murder Club now has a real murder to investigate and with their individual skills, they stay one step ahead of Donna and Chris, and yet they share their information.

Ian, in the meantime, brings his plan to develop an old convent cemetery into another stage of the retirement home, and the citizens revolt—well, as much as any septuagenarians and octogenarians are wont to revolt. In their fit of pique, the residents enter into fisticuffs with Ian, and he drops dead—not by accident, and now the death of the club’s primary suspect in the murder of Tony Curran sends them rushing back to the starting line. Only now, they have two murders to solve, and the cast of possible suspects is growing, including among themselves.

There is Bernard Cottle, a quiet, retired science professor who has a secret in the cemetery that he does not want revealed. Ron’s son, Jason Ritchie, has a dark background and a past association with Tony Curran that puts him in the spotlight. Bring in Gianni Gunduz and Bobby Tanner, both whose past relationships with Tony did not end well, and then there is Bogdan, Tony’s replacement with Ian, who is a fixer of all things and minor partner with Ian.

If the murders of Tony Curran and Ian Ventham are not enough to energize the club, a skeleton is found in the cemetery—a skeleton that does not belong there. The bodies pile up and the club must not only find the murder—or murderers but expose the many secrets of the lives they intersect with and often their own.

The Thursday Murder Club is a fast, and at times, hilarious read. Osman has done an outstanding job of bringing his characters to life and making them as individual as if they were real. This is definitely a read for a cold, rainy night with a cup of tea and some scones.