Thunder at the Gates: The Black Civil War Regiments that Redeemed America 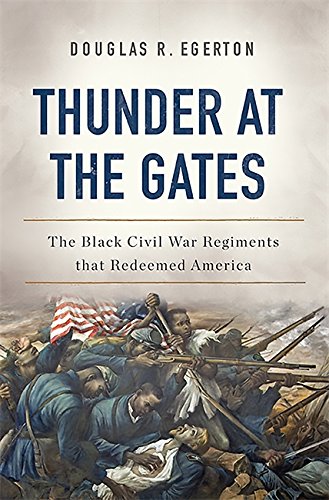 Although the story of the contributions of African Americans during the Civil War has been garnering much more attention over the past 25 years, mainly through the film Glory and its depiction of the 54th Massachusetts Infantry at Fort Wagner in July, 1863, there is still considerably more of said story to be told and certainly in additional and extensive detail.

Author Douglas R. Egerton’s effort in this case brings more of that into the light. To his credit, he has produced an account of the three African American regiments raised by the Commonwealth of Massachusetts for the Union war effort. He has done so by focusing on prominent, and sometimes even unique, members, white and black, of each unit, providing an inside and personal look at their individual and respective attitudes and motivations for serving.

It is told through the eyes and words of 14 of the sons of well-known Quaker and/or abolitionist families, such as the Shaws, Hallowells, and Adamses, who formed the (white) chain of command and those mostly freemen in the ranks, many of whom came from more states than just Massachusetts to fill out the ranks.

Once it became possible to form, organize, and recruit such military formations, through the issue of the Emancipation Proclamation and passage of the 2nd Confiscation Act and the Militia Act, it remained to be seen if soldiers of African descent had what it took to be soldiers. Initially, they were only ordered to perform fatigue duty, building roads, bridges, fortifications, and camps before finally being given a chance to “see the elephant.”

Ultimately, of course, the 54th Massachusetts Infantry joined in the assault on Fort Wagner where Colonel Robert Gould Shaw was killed gallantly leading his troops and buried with them in a common grave in front of the fort. Although a defeat, they had proven their worth as soldiers and men. The 54th went on to fight at Olustee, Florida, and participate in the coastal Carolina Campaign in conjunction with Sherman’s March to the Sea in the fall of 1864.

Interestingly, the 54th’s sister regiment, the 55th, was composed of many runaway and contraband slaves from Southern states. Its initial efforts were hamstrung by the illiteracy of the rank and file yet eventually developed into an efficient unit, one albeit rather more “enthusiastic,” as it were, about wreaking vengeance on slave owners and attendant institutions than its sister.

One last test remained: Whether African American men were cut out to be horse soldiers. Given the expense and training necessary for a cavalry unit, there was some considerable resistance to the concept. Yet once again, the 5th Massachusetts Cavalry performed up to the standards of the previously recruited infantry.

Needless to say, the guiding and overarching principle for these men was to prove themselves worthy of state and national citizenship and all of the rights and privileges that come with that: Public education, housing, right to vote, etc. Given the racism and white supremacist nature of 19th century America, that didn’t happen, although they were generally accorded the respect of their fellow white surviving Union veterans.

Their contributions to the Union war effort were overlooked or forgotten in the postwar era of reconciliation and mostly remembered only in more recent years.

This is a well written, well researched, and interesting book, giving more spotlight to the lesser known 55th Infantry and 5th Cavalry and efforts to finally commission black officers. But there are at least two minor criticisms to be made.

These are cases of confusion and somewhat misleading text. The author gives the impression that Massachusetts Governor John Andrew had the authority to commission black officers. That may be under his state militia authority but was not so recognized when a volunteer unit was under the authority of the War Department.

The other leads one to believe that a lieutenant could order a regiment to be attached to a colonel who would then be an acting brigade commander. One look at the author’s source, the Official Records of the War of the Rebellion, clarifies that the lieutenant was acting under the authority of the commanding brigadier general, not referenced on the page.

In any event, these are minor, and one should certainly not be dissuaded from reading Thunder at the Gates as a result. The use of primary sources was extensive and supported by more recent secondary scholarship. The illustrations and photographs complement the text.

The postwar legacy of these soldiers continues and, as is emphasized, it has taken considerable time for America to come around to recognizing their manhood and exercising those rights and freedoms that many of their white contemporaries took for granted.