Thrill Me: Essays on Fiction 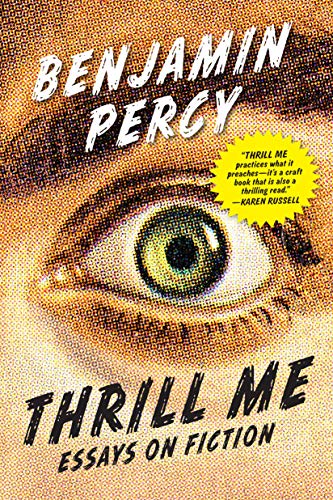 If you have an interest in writing and haven’t gone the route of a Master of Fine Arts, read this book. And if you have gone route of the MFA, then bow down to Benjamin Percy’s Thrill Me and recognize it for what it is: a lion of the literary establishment standing up on his front paws and roaring up a sequel to Anne Lamott’s Bird by Bird.

After years of teaching in MFA programs and publishing three novels, Percy has gone rogue to pen stories for DC Comic’s Green Arrow and has sold scripts to Fox and Starz. Like Dylan going electric. Because, as Percy makes clear from his title essay, he’s always been on the side of telling a good story.

After graduating from Brown University, and years of teaching, Percy takes on literary fiction’s uncomfortable relationship (read “hatred of”) with genre fiction—or as Percy coyly calls it, “popular fiction.”

With pride Percy admits it’s tales with “vampires, dragons, and robots with laser eyes” that make his heart go pitter-patter. “Books were portals meant for escapism,” he writes. In a word, Percy seems to believe books are supposed to be fun.

Flying the flag of “story” high, Percy advocates for a careful study of narrative and acute attention to the technique of building tension and arc in a piece of writing. While the essays aren’t revolutionary on the craft of writing—in fact, they’re pretty lean on original advice—Percy writes with such a deft personal touch that you imbibe one or more of these essays, even the book, in a single sitting.

We hear of his son in the hospital, his touching obsession with Batman, a showdown with his college professor over genre fiction, his out-of-his-league beautiful wife—at times we wish that he would just write a darn memoir seeded with writing tips. Nevertheless, by the time you close the book you feel like you know this guy.

Despite his push toward those stories with vampires and dragons and robots Percy is comfortable in the abstruse language of the workshop. How you put a situation “under pressure,” how a subject is “elided,” characters flat instead of round, and so forth. Except when Percy drops into workshop-speak the terms don't come off as jargon, as they might in the hands of a lesser writer. Instead, his counsel reads as sincere concern for the craft.

As he says, he sometimes views himself as a referee along the lines, running back and forth, calling penalties. He takes this job seriously— and thus we take him seriously. He also never appears to drop terms only to appear intelligent. Unlike 99.9 percent of writers, he doesn’t seem too worried about this. Also unlike 99.9 percent of writers, he appears content in his own skin.

Yet the essay “Get a Job” is confusing and somewhat of a letdown. In a writing world that provides two alternatives—jump in bed with New York City publishing, or get your MFA and teach—he seems to suggest a third way out: find work, make money to support your writing, and get good material in the process. As he rightly observes, “The library can do only so much for you. You need to write from the trenches.” Amen.

Except in the essay Percy only advocates for a thorough understanding of one’s character, good research techniques, and a clear sense of empathy. For experience, he counsels us to look to the past. Man. What happened to just get a job?

Aside from these quibbles the book is written by someone who believes that the stakes for writing—now more than ever—are high. Writing holds our attention if it is good; occasionally, it even thrills us.

Never have we needed to be thrilled as much as now.

Brendan Jones is the author of The Alaskan Laundry.