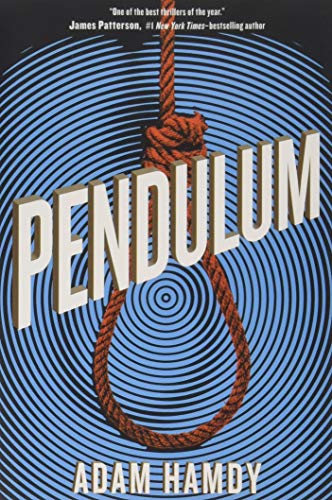 A thriller that combines almost unbearable suspense, a nightmare figure out of some twisted superhero comic, the worst consequences of technology, and an ordinary man who lives almost as a recluse—all pull the reader into a life-threatening puzzle to which there seems no solution.

A knock on the door is photojournalist John Wallace’s last memory until he wakes up bound, blindfolded, with a noose around his neck and the other end of the rope looped over a ceiling beam. This is some sort of mistake. John has never wronged another enough to be the object of some retribution. His would-be murderer has the wrong address.

“It’s easier if you stand.” Those are the only words the man says as he tightens the noose before freeing John from his blindfold and bindings. Not even his worst days in Afghanistan have prepared him for his executioner. A figure all in black: black body armor, black leather boots and pants, black helmet, and dark goggles. The unhuman looking figure pulls him up, and John begins to choke. “There is no glorious grace in fighting from the end of a noose, just simple, ugly survival.”

John survives, not through his own efforts, but because the ceiling beam breaks, and he lands on his back, covered with plaster and timber. Desperate to survive, John scrambles up and dives through his second story window. His fall leaves him with contusions, lacerations, a broken wrist, broken ribs, and a fractured collar bone, but he is alive. In the hospital he files a police report, but with absolutely no forensic evidence, the police dismiss it as a suicide attempt, even if Detective Sergeant Baily has some doubts.

John is sent to a psychiatric hospital where no one believes him either. He refuses to give his name, believing he is safer that way. When his frustration overcomes him he lashes out at DS Bailey who gives the hospital John’s name. Just as John fears, his armor clad assailant breaks into the psychiatric hospital, leaving dead bodies behind him as he makes another attempt on John’s life. Through luck and an aikido defensive move John once more escapes, this time to take refuge with Connie, his former lover.

Safe in Connie’s flat, or so he hopes, John logs on to the internet to search for staged suicides that might include a masked man. He learns nothing except that “. . . another common feature shared by all the staged suicides was that the victim and assailant knew each other.” But how could that be? “He was a photographer, an observer, and didn’t make enough impression on life to have accrued enemies.”

Ready to give up his internet search he clicks on a website called “Suicide Methodology” and hits pay dirt. A post on the website recounts a story about a man hanging himself whose wife claimed he had been threatened by an armored figure. It is a clue that leads John to the victim, a farmer who secretly participated in a sex ring. John doesn’t know the farmer in life, has never met him, so how can this victim’s staged suicide by an armored man possibly relate to him? But it does. The farmer had commissioned an artist’s sketch of the armored man which is identical to John’s assailant.

John contacts Detective Sergeant Bailey with his story about the farmer. After investigating, Bailey and his superiors agree that they need to find the armored man, and the best way to do that is to use John as bait. Against Connie’s protests, John returns to the psychiatric hospital where one again the armored man makes an attempt on John’s life. Again the collateral damage to police and hospital employees approaches double digits. John escapes again, but Detective Sergeant Bailey is shot. The police assume John is guilty of the deaths and launch a country wide manhunt. The only person besides John who can tell what really happened is Bailey, and he is in a coma.

The action escalates as John seeks a gangster friend of Bailey’s for money and a false passport. He travels to the U.S. and contacts an FBI agent who has been demoted and is on suspension. The two track down more staged suicides, including two teens whom John doesn’t know. How can he be connected to two American teenagers who live in different states? The only factor in common all the victims is that each supposedly posted a suicide note on their computer.

The reader is as confused and puzzled as John. Although the clues are there to answer the question of the link between victims, Hamdy provides enough red herrings and false leads to thoroughly mislead a reader. Also the nonstop action and the horrific body count tend to distract one.

All in all, Hamby’s novel is addictive; one cannot stop reading. The underlying subplot of the dehumanizing effect of social media and the danger it poses is as frightening as the image of the armored man. Hamdy’s use of the image of the pendulum to explain the good news-bad news aspects of john’s life is very effective. The average man’s life is affected by the same pendulum that swings between the good and the not so good.

Although John’s ability to overcome the frequent beatings and accidents that leave his body in horrific physical condition is over the top, heroes of thrillers seem to better self-healing powers than the average man. The high body count is not out of line for a thriller, and the total disregard for human life by the armored man is symbolic of the inhuman aspects of social media. Bother as a suspense-filled thriller and a warning to civilization about its dependency on technology, Pendulum by Adam Hamdy succeeds beautifully.