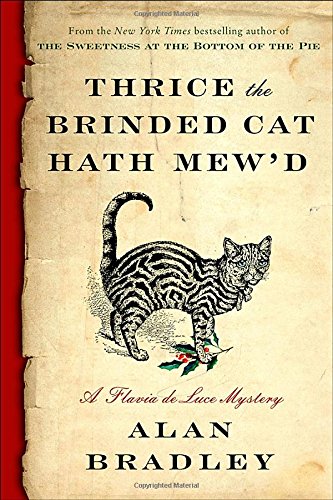 “May Alan Bradley live to be a hundred and write a new book every year, and may Flavia never grow up.”

Mystery fiction’s most precocious, independent thinking, feisty, amusing, and likeable twelve-year-old chemist and occasional detective Flavia de Luce is back again in yet another murder investigation. It’s messy and sometimes dangerous work, but someone has to do it, and Flavia feels eminently qualified.

It is not that Flavia stumbles across dead bodies on purpose, but she does not shy away from them either when she does happen to find one. Besides, she needs a diversion.

Upon her return to England after being expelled from Miss Bodycote’s Female Academy in Canada, Flavia finds life at her crumbling family estate, Buckshaw, is all awry. Her sister Feely has broken off her engagement to Dieter Schrantz, former German POW; her sister Daffy is—well, daffy; and unwanted and orphaned cousin Undine whose “place in the family remained to be seen,” but Flavia isn’t anxious to see her.

The worst news of all is that her beloved father, Colonel de Luce, is gravely ill and in the local hospital. Her adored father, the only one in the family who understands her, or maybe is just at a loss as to what to do with her, which might be the same thing, has pneumonia.

The crushing blow, the one that brings tears—and Flavia doesn’t ever cry—is when she learns that Esmeralda, her dear precious Buff-Orpington hen has been turned into a nourishing broth for her ill father. “Love is love, wherever you may find it, even if it’s covered in feathers.”

Desperate to escape her family, Flavia rides to visit with the vicar’s wife, who is also ill. As a favor Flavia agrees to deliver a note to a reclusive wood carver. Finding the door open—or maybe just a little open—Flavia enters the rather ramshackle cottage just in case the wood carver didn’t hear her arrive.

Yes, the wood carver is home, but no, he didn’t hear her because he “was hanging upside down, lashed on the back of the door—his arms and shackled legs spread in the shape of a human  ‘X.’”

No doubt about it; Mr. Sambridge the wood-carver is quite dead.

Flavia being Flavia takes the time to examine the body: full set of teeth and thick hair, both unusual for a man his age whatever it is. There is a smell of sulfur in the room, but Flavia rules out the supernatural. There is also an Irish Hospitals’ Sweepstake ticket and multiple copies in pristine condition of children’s books, mostly rhymes, by Oliver Inchbald.

The books feature the adventures of Crispian Crumpet, based on Inchbald’s real life son. But why would an old murdered wood carver—and Flavia is almost certain he was murdered—own these children’s books? She notices another book, a copy of Hobbyhorse House, that is old and grubby. Inside she finds the name Carla Sherrinford-Cameron.

At last a lead! Flavia knows Carla and doesn’t like her, but that is beside the point. Why would a book owned by Carla be in old Mr. Sambridge’s cottage? It is an anomaly and Flavia intends to question Carla. Subtly, of course.

The only other oddity is the visit by a cat to the murder room, a cat that seems to make itself at home. Whose cat is it? Mr. Sambridge’s or someone else’s?

She notices someone watching from the neighboring cottage as she leaves Mr. Sambridge’s house. “It seemed to me that the best choice was to amble off with a casual air, as if I were just another girl on a bicycle . . .”

Except Flavia is not just another girl; she is already planning on matching wits with Inspector Hewitt.

First though she plays up to Carla, and learns that the girl’s Aunt Louisa, now deceased in a swimming accident, not only worked for Inchbald’s publisher and knew the author, but identified his body when his own son refused. “He was pecked to death by seagulls while he was bird-watching.”

Flavia doesn’t learn why Carla’s book was in Sambridge’s cottage, but she has an idea about her next step in her investigation. She goes to London to question Inchbold’s publishers about the author and Aunt Louisa, their relationship, but learns nothing to explain why a poor wood carver would have Oliver Inchbold’s children’s books.

With her usual persistence Flavia continues her investigation, learning some surprising facts about Mr. Inchbald and Mr. Sambridge, facts that turn the case upside down and inside out. A study of newspaper archives also turns up a boy scout witness who found Inchbald’s body. “Nothing left of him but bones,” the boy tells the newspaper.

If there was nothing left but bones, how did Aunt Louisa identify the body?

Flavia tracks down the boy scout, and with a few fibs manages to obtain the hand-drawn map he had made of the death scene, as well as a few pictures he took. Map and pictures are enlightening. So is Flavia’s visit with Inchbald’s son who happens to be hiding in Mr. Sambridge’s neighbor’s home. Very curious indeed.

Sometimes it is the smallest, most unexpected detail that solves a case, like initials recently carved in church woodwork. They are initials that Flavia recognizes, initials that eventually lead to a near fatal end for the intrepid girl chemist and detective.

Alan Bradley’s Flavia de Luce is one of the most amusing female sleuths in mystery fiction, not in the least because Bradley’s humorous narrative style is the best in the business. May Alan Bradley live to be a hundred and write a new book every year, and may Flavia never grow up.