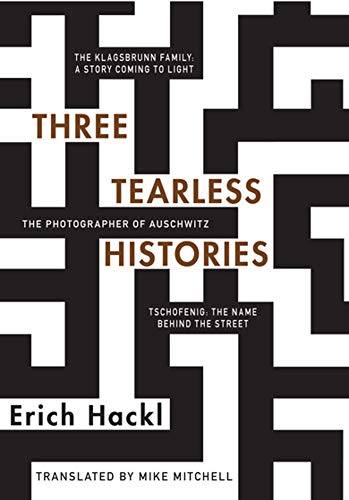 “Hermann, your mommy was arrested on September 25, 1944. Leni and I knew why, it was terrible. Your mother in the Gestapo hell. It was our wish to have you. And on April 27, 1945, at 8 o’clock in the evening, your mommy was shot by the SS camp commandant and the Hungarian sentries. On May 13th, we shoveled the rubble on the mound away and we came to your mommy. Hermann, your mommy was buried on May 15th, 1945. You were there. You threw some beautiful daises in for her. No one else was there.”

Three Tearless Histories is an unusual collection of stories about European families destroyed by mid-century Nazi fascism. Described initially through photographs, the book carries the reader much farther, offering an unexpected level of profundity while eliciting a sense of belonging and empathy. The result is a collection of indelible images that describe the circumstances surrounding the Nazi genocide and the broken lives of survivors. It also reveals the courage and determination of those who fought with the resistance.

"The Klagsbrunn Family." This multigenerational story describes a successful Jewish Austrian family that barely escape Europe ahead of Nazi persecution. They sojourn from Vienna to Brazil, then through the passage of time, we observe the family’s next generations, their hopes and desires shattered by another fascist regime. As leftists, Victor Klagsbrunn (son of the patriarch) and his wife are jailed by the operatives of Brazil’s fascist dictator. Imprisoned and tortured by the state police, they eventually escape, flee to Argentina and Chile, and decades later, return to Europe to live in Berlin.

"The Photographer of Auschwitz." This is the fragmented biography of Wilhelm Brasse (1917–2012) who photographed Auschwitz prisoners and saved evidence of medical experiments and crimes by the notorious Josef Mengele. A Polish political prisoner, Brasse recalls the thousands of faces he saw at Auschwitz, yielding a window into daily life at the Nazi death camp. Altered forever by what he saw, Brasse became devoted to saving as much evidence as possible of the Nazi genocide.

"Tschofenig: The Name Behind the Street." This is the account of resistance fighters Gisela and Pepe Tschofenig, who were secretly married in Dachau. Gisela was later captured and shot by the Gestapo just days before the war ended. Today in Linz, the author’s home city, an inconspicuous street carries Gisela’s name. Yet her accounts of bravery and acts of valor have remained virtually invisible to the world due to family infighting.

Hackl proffers these three short stories in a straightforward documentary style. He gleans facts from extensive research with photographs, government records, travel itineraries, and anecdotal data. In doing so, he brings to life characters who were critical to the resistance against Nazism and later fascism in South America, but which heretofore have not been public knowledge. They come to life here, bolstered by facts, records, detailed interviews, and the author’s interpretations.

As this is not a novel, the author’s literary hands are tied. The demands and limitations of nonfiction bind him to facts more than emotions. Within the decidedly restrictive walls of literary nonfiction roles, Hackl still finds a way to make the characters, situations, and locations come to life.

Hackl’s use of emotional triggers related to injustice and redemption are both subtle and commanding. In the same way that we relate to injustice of the oppressed, this author delivers stunning situations in which innocent families and characters are destroyed by an unjust rule of law. Yet the ultimate value of a book like this lies in the author’s delivery of life between the lines, beyond the vagaries of a reader’s sentient ability to comprehend. Here, Hackl elicits his best and most enduring success.

The reasons why a character decides to do something significant are at least as critical to this collection of stories as are the reasons why those characters became oppressed, incarcerated, tortured, and/or murdered. In the end, the legacy of these characters derives from their resistance to injustice, from their bravery in the face of certain death, and in their willingness to die defending the cause of freedom and righteousness.