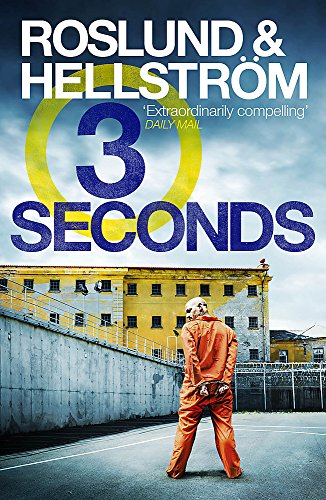 “FACT: The Police Service has for many years used criminals as covert human intelligence sources. A cooperation that is denied and concealed. In order to investigate serious crime, other crimes have been marginalized and a number of preliminary investigations and trials have therefore been carried out without correct information.” —Three Seconds (backmatter)

The most serious crimes in this novel are the Polish mafia’s infiltration and control of the drug trade in the Swedish prison system and the corruption of Swedish officials—including the chief superintendent of police, a national police commissioner, a state secretary from The Minister of Justice—and a prison system accommodating the crime.

American fans of crime novels will be pleased with Three Seconds, a complex and surprising novel that was not only 2009’s Swedish Crime Novel of the year, but also is still a European bestseller. A dark and brutal book that is not an easy read, Three Seconds is also a riveting story that serious readers will find worthwhile and memorable.

The authors, journalist Anders Roslund and ex-criminal Borge Hellström, construct a book that is part detective, part social commentary, and part crime and punishment. In spite of the mixed genres, the authors never lose their command of detail, their revelation of injustice, or the twists of the plot.

Who is the hero? Or the antihero? Piet Hoffman, the troubled young father who is also both a former criminal and a spy? Or the lumbering, tired chief police inspector who is determined to solve a murder case. The chief inspector is an example of the authors’ originality as the detective tortures himself with music that reminds him of his role in the death of a young woman.

The authors also use symbols with the right degree of subtlety for success. Suspense, the time, hope, and fear, are all represented in a box of donuts in the middle of a table where the adversaries finally meet face to face. In another instance, a growing hole in a bookcase represents renewal as boxes of painful memories are packed away and painfully lugged to a basement, one by one.

The Swedish authors also know the novel’s settings and produce them in detail. The integrated details of architecture, winding streets, churches, and other landmarks as Hoffman and other characters travel entice the reader. Such care is testimony that the authors did not rush this book, and in fact they researched thoroughly before and during its production. They cite, as sources, criminals serving long sentences, police officers that specialize in covert human intelligence, security, chief wardens, and principal prison officials, experts on forensic science, medical issues, and explosives. Readers who find the pace of the book’s beginning a bit slow will be rewarded as they read on and realize that slower, thoughtful pace is a necessary as a platform for the gripping action that comes later.

The novel intentionally and artfully leaves the answers to the questions it raises to the enthralled reader, a decision most readers will find most satisfactory. Three Seconds, the title, is the time in the book that a shot being fired hits its target.

Three Seconds hits its target. It is a tour de force.