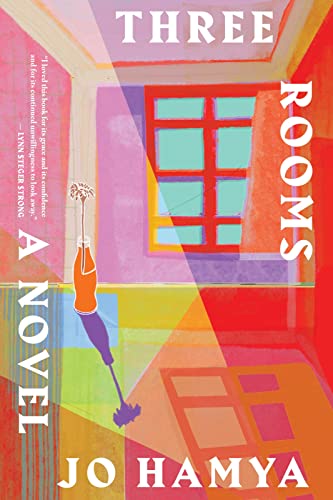 “Jo Hamya’s highly impressive, smart, and sophisticated debut novel Three Rooms is a contemporary response to Virginia Woolf’s A Room of One’s Own.”

Jo Hamya’s highly impressive, smart, and sophisticated debut novel Three Rooms is a contemporary response to Virginia Woolf’s A Room of One’s Own. Using Virginia Woolf’s words, Hamya‘s narrator argues that “intellectual freedom depends on material things,” namely money and a proper place to live. But unlike Woolf, Hamya explores this need not only for white, upper-class women, but also for women of color, who lack social status and powerful connections in modern day Great Britain.

The unnamed narrator of Three Rooms relates her experiences of being badly employed and living in three less-than-ideal situations: first as a postdoc assistant renting a room in Oxford; next as a copyediting temp for a society magazine akin to Tatler, renting a sofa in a dumpy apartment in London; and last, unemployed and back at her parents’ home in the suburbs.

Despite her Oxford degrees, she is poorly paid, and unlike many other students and co-workers, has no family connections or social status to rely on. All of her living situations lack privacy, space, and comfort. Worried about losing her job at the magazine, she tells her unsympathetic white, parent-supported roommate, whose sofa she is renting, “and I’m really fucking sick of not having a room of my own, and sleeping on a sofa, I mean, I know I’m not homeless and there are bigger problems in the world, and you’re right, I can go and stay with my parents for a bit if I have to, but why should I, when did it become ridiculous to think that a stable economy and fair housing market were reasonable expectations?”

Three Rooms is by no means the mere whining of an underpaid twenty-something-year-old Oxford literature graduate. Rather, looming over the narrative are the political, economic, and social upheavals in the UK, like Brexit, the downfall of Theresa May and the rise of Boris Johnson, and the Grenfell tower tragedy. The impacts of racism and classism are also omnipresent. While often in subtle ways, the narrator is told repeatedly by obtuse, well-off white people that since she attended Oxford and is middle class, she is privileged despite being BAME (Black, Asian, and Minority Ethnic), as if there are no significant race or class distinctions in Great Britain.

The on-the-cusp Millennial/Gen Z narrator also addresses the impact of social media like Twitter and Instagram on her peers and how they interact with, disengage from, and perceive the world and themselves. She acerbically describes “The staged authenticity of the room” on an Instagram page of a well-to-do and well-connected Oxford acquaintance. And she is keenly aware of the endless, often distorted bytes of news via social media and popular culture. In order to escape hearing a man listening to the news on his wireless, turned to maximum volume, the narrator puts in her “earworm” only to be assaulted by ”the chart-topping song I couldn’t get away from. The country, going to shit: played over and over on everyone’s electronic devices.”

The narrator of Three Rooms is sharp, wry, ironic, and, as an outsider of sorts, an astute observer of her environment. While at Oxford, on the way to a party at the English faculty, she notes that “the building looked like a Bond lair. The whole thing was designed in rectangles by someone who had evidently misunderstood the purpose of Brutalism.” The narrator is particularly snarky in her descriptions of the entitled, vapid editors at the society magazine. She comments on the editor: “I watched him blow into the office—sunglasses on his head, swathed in the customary ill-fitting clothes of the expensively dressed. . . . His kissed the associate editor in the European style and with the voice of a true Sloane purred, ‘You looked so good at the Cartier last night. So good.’”

Three Rooms is beautifully crafted and well-written. While the narrator’s prose is often crisp and ironic, it occasionally turns lyrical and serious, particularly toward the end of the novel. Although the narrative can be funny and biting, it is also deeply serious. For the narrator’s travails are contemporary twists on those of Virginia Woolf nearly 100 years ago, and the political, social, and economic problems in the UK are hardly new. Plus ça change, plus c’est la meme chose.