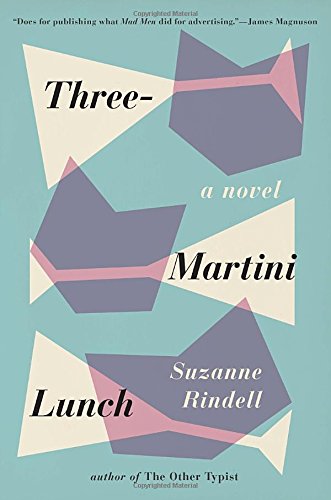 Sprawling across more than 500 pages, the new novel Three-Martini Lunch captures the excesses as well as the inhibitions of New York City in 1958, from the eponymous meals of the big Manhattan publishing houses, to wild drinking-and-drug bouts in Greenwich Village, to the lingering paranoia of McCarthyism, to the casual racism, sexism, homophobia and anti-Semitism among the professional class.

The intertwined narratives of the three main characters—Cliff, the lackadaisical, Village-slumming son of a publishing executive; Eden, the Jewish girl from Indiana who dreams of being an editor; and Miles, the closeted gay poet from Harlem—rarely flag.

Yet Three-Martini Lunch is perhaps too true to history. Many of the plot lines and characters dredge up clichés that hark back to 1958 or even earlier:

To her credit, author Suzanne Rindell—whose first novel, The Other Typist, is also about a working gal in pre-1960 New York City—succeeds in the tough job of giving her three narrators distinctive voices. And certainly the story has some good twists that keep it galloping.

But Rindell has padded this way-too-wordy book by at least 50 pages by constantly making the same point twice. For instance, after Eden starts going to book publishing parties, she realizes that, “If you do the math in this equation you are destined to realize that more often than not the eventual result of any given party turns out to be a bunch of people’s secretaries meeting a bunch of other people’s secretaries, and all too often that really was what it boiled down to.” The entire last clause of that sentence, beginning with “and all too often,” repeats what Eden just said in the first part of the sentence.

The Miles sections are the most fascinating yet also, ironically, the weakest. After about the tenth time, it’s no longer believable when Miles muses that “for some reasons I didn’t quite understand” he feels a stirring when another man touches him, or doesn’t want to disappoint a handsome young man he has just met, or the like. Perhaps Miles can’t admit it openly, but surely by now this supposedly introspective and insightful poet realizes privately that he just might be gay?

This novel’s greatest value is sociological. While we still face too many social injustices today, it’s important to remember how much worse conditions in the U.S. were when all working women were “girls” and all African American males were “boys.”

Even Eden’s most sympathetic mentor—a successful and stylish female editor named Mavis Singer—warns her that “if you really want to make it as an editor, I would advise against marriage or a family.”

And it’s sadly appropriate that the only time Miles and his boyfriend Joey can truly share their love is on a houseboat, never on solid ground.

Cliches or not, the strongest way to ensure that we don’t repeat the past isn’t by reading a history book. It’s through an engrossing story that brings that past to life.