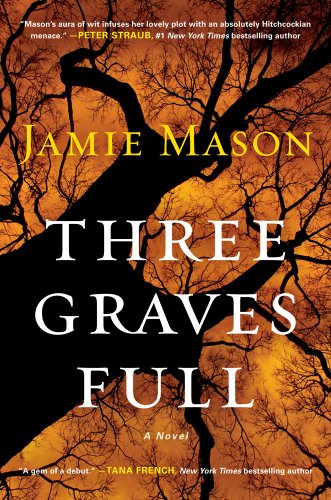 “Three Graves Full is deep and dark, yet funny, a refreshing combination that snags the reader like a grappling hook—destined to become a success.”

Three Graves Full is an extraordinary debut novel that ensnares the reader in its web of suspense and ratchets up the anxiety with each chapter.

Jamie Mason has created a very believable, sad sack of a character in Jason Getty. Getty leads a very unremarkable life until he makes the mistake of befriending a stranger. Garry Harris treats Jason like a sucker and eventually turns out to be Jason’s worst nightmare.

As their friendship devolves into an adversarial one, Jason is thrust into a situation forcing him to murder the man. Unable to think of a better way to dispose of the corpse, Jason decides to bury the body in the backyard of his home. Little does Jason know, but two other bodies are buried on the property as well.

The police eventually become involved when landscapers discover the cadavers, and Jason rightly assumes his life is probably over; however, the author interjects a number of strange and interesting twists so that what was once perhaps predictable becomes ambiguous. Her ability to fully integrate action scenes into the story makes her book a thrilling read.

Ms. Mason uses subtle, sometimes dark humor to liven up the macabre events. Her writing style is quite interesting and at times more suited to romance writing. But oddly, it works. For a new writer, she is adept at character development, allowing the reader a 360-degree view of each. She neatly ties up all the loose ends, leaving the reader with a satisfying conclusion.

Three Graves Full is deep and dark, yet funny, a refreshing combination that snags the reader like a grappling hook—destined to become a success.