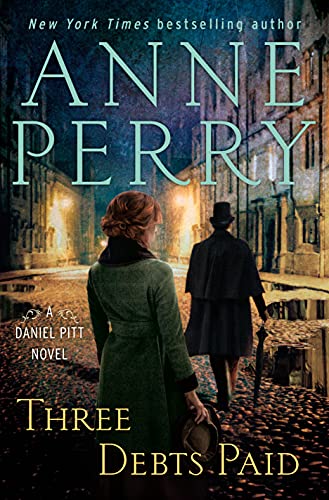 “A typical Anne Perry story, not so graphic in the details of the crimes, but giving the reader great depth into the characters of the protagonists and the villain, as well as a wealth of social and legal aspects of the Victorian era.”

Young Daniel Pitt, now a barrister with the law firm of fford, Croft and Gibson, is handling a case of accused plagiarism and assault, referred by his friend and former school friend Inspector Ian Frobisher.

“‘He has a case I believe he wishes you to take, sir. A matter arising from an instance of . . . plagiarism.’ He said the word as it were the name of some obscene minor disease.”

Daniel knows the defendant well; the man was one of his instructors at Cambridge.

“Wolford’s arrogance had always been as clear as his passion for the drama of the past. Daniel could not imagine him borrowing from anyone else, much less stealing by imitation.”

Nicholas Wolford is controlled in the classroom. He fills his lectures with a life making his students eager to learn more. In private, he’s short-tempered and argumentative, and at the moment, with his professional life at stake, is teetering on an emotional tightwire.

“‘Tolliver swung at Wolford, but completely missed, and Wolford hit back at him, and did not miss at all. He connected. Pretty hard.’”

It's Daniel’s opinion that the other author is merely using the sensationalism of the trial to promote his own book.

Inspector Ian Frobisher is in charge of the investigation of murders by a killer the newspapers have dubbed “The Rainy-day Slasher,” because he attacks his victims during one of the many rainstorms currently inundating London. He’s getting flack because his investigations have not turned up a suspect.

“‘You’re supposed to be the brains of the outfit, Frobisher,’ Petheridge said quietly. “What have you got? If you tell me one more thing any idiot could have worked out, I’ll put you back on the beat.’”

So far, there have been three victims, and the three have nothing in common except they were all attending Cambridge, though years apart, and were acquainted in some way with blind vicar Richard Rhodes. There’s also one fact the police have not released to the press: Each victim is missing part of their forefinger.

Miriam fford Croft is a woman invading a man’s world. Just back from studies in Holland, she is one of two female pathologists working for the police in London.

“Miriam had worked hard to be acknowledged in a field that, in England, was for men only. All of this she must do by exercising her intelligence, relying on the knowledge she had gained during her studies, and gathering facts that could be testified to in court. There must be no ambiguity, and, above all, no error.”

She’s also Daniel’s friend and meets Ian during his investigations. Ian immediately sees something both Miriam and Daniel are very deliberately ignoring.

“The thought crossed his mind that he was certain Daniel was in love with this woman, whether his idiot friend realized it or not.”

Abruptly, Ian is ordered not to pursue investigation into the background of one of the victims, banker Roger Haviland.

“‘I’ve been told by the Home Office to leave Haviland alone. Or they’ll demand I put somebody in your place who can understand orders and obey them. Go find your slasher, but do it some other way. Do you understand me?’”

That makes Ian wonder: Was Haviland the intended victim? Were the other deaths merely to throw the police off the track?

“‘Have you considered that perhaps one of them is the real target and the other were killed simply to conceal that fact?’

It was a horrifying idea.”

With Miriam and Daniel’s assistance, Ian will learn the answer to that question and others posed during his investigation. He’ll discover the killer and a great deal more as he learns that insanity isn’t always visible to the naked eye.

This is the fifth entry in the Daniel Pitt series chronicles the adventures of the son who hasn’t followed his famous father into the investigative branch of the law but instead defends those accused.

As with the Thomas Pitt stories, author Perry fills her novels with commentaries on the social mores of the times, as well as its legal aspects, giving a mini-history of the period while weaving a complex tale of mystery and murder told from the point of view of Pitt’s son, Daniel.

Thus, the reader is presented with a tale of simultaneous cases of laws being broken, and the intricate, dangerous, and convoluted events leading to their resolution.

Three Debts Paid is a typical Anne Perry story, not so graphic in the details of the crimes, but giving the reader great depth into the characters of the protagonists and the villain, as well as a wealth of social and legal aspects of the Victorian era.