The Three Death Sentences of Clarence Henderson: A Battle for Racial Justice During the Dawn of the Civil Rights Era 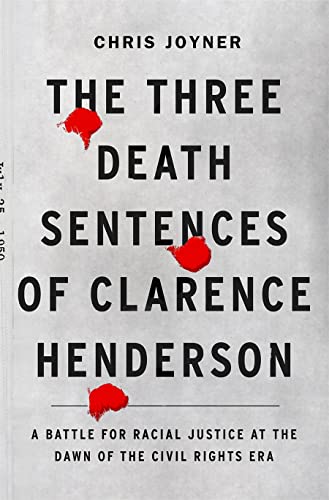 Racial justice, judicial reform, and systemic racism have been hot topics on the nation’s radar screen in recent years. For those who consider the state of such at the present time, read about the case in question in this publication, back in the days of racial injustice and systemic racism in the days of Jim Crow in the Deep South, when being African American was itself practically a crime in the making.

Courthouse files are replete with cases where a, more often than not, a young Black man was railroaded on the flimsiest of “evidence” or convicted on that which was mostly circumstantial. With odds stacked against them, how were these tragic unfortunates to obtain justice in an overwhelmingly white judicial system? Is it any wonder that many suffered the ultimate penalty where white society and its women were to be protected at all costs?

Author Chris Joyner has reconstructed this entire Clarence Henderson case, from the circumstances of the murder itself to the evidence collected and presented to each of the juries in the individual trials conducted by the prosecutor of Carroll County, Georgia, against him over the course of three years. That each resulted in the death penalty is astonishing enough and even more so that a Black man could escape so-called white justice in the late ‘40s and early ‘50s.

Thankfully, Henderson had defense teams for his trials that included lawyers from the NAACP as well as a progressive white lawyer who fought to save his client’s life despite a paucity of resources, financial and otherwise, and notwithstanding the establishment of a state crime laboratory and its attendant technology.

Also, there was no help either in having the deck stacked against him in terms of all-white juries, a lack of full and complete investigations of other potential suspects, changing stories of witnesses from trial to trial, and the most convoluted trail of evidence, ranging from testimony of uncertain voice identification to doubts about the alleged murder weapon, and the fact that ammunition for it was allegedly filed down in order to fit the weapon’s chambers.

Completing what today would have been considered a kangaroo court was the fact that the judge not only overruled legitimate defense objections and allowed testimony that should not have been or was otherwise contradictory from trial to trial, but there was also a conflict of interest in that the judge’s brother-in-law was a member of the prosecution team. And, of course, Henderson’s alibi for the night in question was conveniently disregarded.

All of this prompted the Georgia Supreme Court into granting a new trial on appeal, not once but twice—something else unheard of. In the meantime, Henderson spent two years in jail, unable to support his family, which was forced to relocate and live elsewhere with other family members, assisted by donations from members of Black churches across the country in a closely watched case with potential consequences for people of color everywhere.

The ultimate disposition of the case will not be revealed here, but Joyner concludes the story with an epilogue describing the post-trial lives of all the major players, many of which did not have the best of outcomes and only serve to highlight the ongoing tragedy of this case.

There were more twists and turns than the Mississippi River, and the reader will be challenged by all of the convolutions and contradictions in each trial. Consequently, one must pay close attention and keep in mind that the devil is in the details.

Although there is no formal bibliography, the endnotes provide the information needed to ascertain the sources employed to bring this story together. If there is any criticism to be made here, it is the fact that there are no photographs of locations, places, persons, etc., except for those on the inside of the cover, and they have no identifying information or captions. Additionally, there are no maps, so one is forced to consult a Georgia atlas for the overall location of the case.

Our justice system may not be perfect—and most likely never will be—and is still in need of continuing reform, but it’s a far cry from what it was 70 years ago when it was almost invariably stacked against minorities in an obviously white supremacist society.