The Three-Cornered War: The Union, the Confederacy, and Native Peoples in the Fight for the West 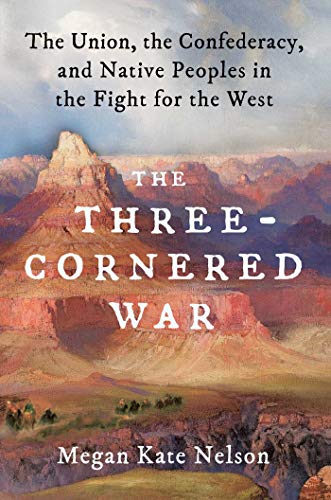 “This volume fills a critical gap in the study of the American Civil War, narrating that it truly was a continental war with potential repercussions far beyond the Washington-Richmond corridor or the Mississippi River valley.”

A great deal of Civil War history has been written on the huge battles between Washington and Richmond in the Eastern Theater, or the struggle for the Mississippi River and its tributaries in the deep South. But the Civil War was truly a conflict that spanned the continent, and this noteworthy new book explores the mêlée carried out to secure the desert southwest, consisting of the Arizona and New Mexico Territories.

When the Civil War began, even as massive armies were being assembled to try and decide the fate of the war, smaller forces were being gathered to decide the outcome of a continent as the secessionist and pro-Union citizens in these territories made their allegiances known and appealed for help from their respective governments.

Both the Lincoln and Davis administrations recognized the long-term strategic importance of these territories as the gateway to the Union state of California and an eventual trans-continental railroad to a Pacific port that could provide a manifest destiny for either nation to begin closing in and settling the remaining territories as either free or slave states. The potential mineral wealth of gold and silver that might be mined offered an additional incentive to control these territories and the race to accumulate enough military power to conquer and hold these territories was on.

The author conducts the narration through the eyes of various participants, Union, Confederate, and Native American, to show the personal side to the conflict and how much a single individual could change the outcome of a series of events. Each of these individuals had their own motivations during the war, some noble, some more selfish, but all of them were swept up into events that often had more far reaching effects than they intended.

Throughout the active part of the fighting in the eastern part of New Mexico Territory neither side was particularly well equipped to conduct desert warfare, with its harsh terrain requiring an emphasis on logistics and planning, particularly as the small towns and cities in the territory became less militarily important than water sources and the numerous depots maintained by either the US or Confederate armies or the companies that operated the two overland mail and stage roads.

The Union Army did have the advantage of being mostly on the defensive and occupied a series of strategic forts and outposts that they were able to keep fairly well supplied. The Confederate Army lacked any real capability to sustain even a modest army in the field and suffered its greatest defeats not in battle, but when Union forces were able to destroy their supply columns or keep them from securing water sources.

The major military campaign was basically over by the end of 1862 with the battles of Apache Pass, Glorieta Pass, and Valverde offering some tactical victories for the Confederate forces, but long-term strategic victory for the Union when they were able to destroy the Confederate wagon trains and force them back into Texas. Many readers may be surprised to find that both Colorado and California made a substantial contribution of troops to the war effort and provided the critical manpower to finally drive the Texans completely out of the Arizona and New Mexico Territories and secure them for the Union.

But once the Union forces seemed to be victorious, the second and more bitter war began between the Union Army, Mexican settlers just across the border, and the various Native American tribes such as the Apaches and Navajos opposing the encroachment of mining camps and forts in the wake of Abraham Lincoln’s signature Homestead Act designed to open up the western territories to settlement.

The Army fought what today might be considered a counter-insurgency campaign, seeking to put the various tribes off their land and into reservations so they could be ‘civilized’ and their land given over to settlers and miners. The tribes, being much more familiar with the terrain and the location of precious water and grazing locations, were often able to elude the Army unless they wished to give battle.

The Army finally developed what today would be called an attritional “scorched earth” strategy, destroying native crop fields to essentially starve the tribes into submission. In this they were only partially successful, with many tribes continuing to evade US government control for another 30–40 years. The author continues the narration until the later 1860s to show how the various participants were affected by the end of the war and the post war expansion into the west, including the development of railroads, mining towns and cattle ranches.

This volume fills a critical gap in the study of the American Civil War, narrating that it truly was a continental war with potential repercussions far beyond the Washington-Richmond corridor or the Mississippi River valley. For students wanting to explore this largely forgotten theater, it is highly recommended.