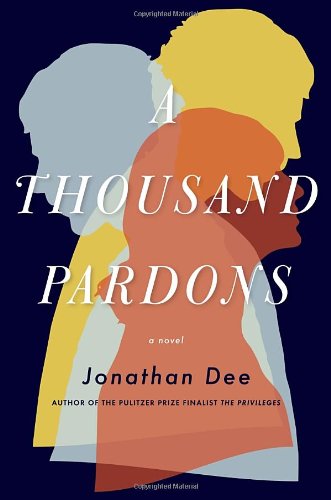 “A Thousand Pardons has the potential to lead Jonathan Dee to yet another award.”

To the casual observer, Helen and Ben Armstead are a stereotypical couple that has achieved the American Dream. Living in a small suburban New York town, the couple and their daughter, Sara, are respected members of their community. Ben is a partner in a highly successful law firm, while Helen enjoys a storybook homemaker’s existence, tending to her husband and adopted daughter.

But the dream morphs into a nightmare when Ben, tired of his mundane, albeit successful career, decides to do something out of character. His actions result in a catastrophic upheaval that sends the family into a downward spiral.

Losing Ben’s salary causes Helen to grudgingly enter the workforce, a place she’s rarely ever been. With minimal skills and no knowledge of the latest technology and social media, she nevertheless steps into the public relations arena. Surprisingly, Helen discovers she has found her niche in this complex genre by employing a technique her colleagues rarely ever use—the art of the apology.

Her special gift grants her clients’ forgiveness and second chances and soon shines a bright light upon her. She is quickly courted by one of world’s most successful PR firms and is offered a prestigious, well paying position. Her success, however, launches her into a dark, complex case that could spell disaster for both Helen and her client.

A Thousand Pardons is a well-written, contemporary story, one that evokes myriad emotions. The reader will instantly be attracted to the well-developed characters and bond with the protagonist. Jonathan Dee also incorporates several social issues deftly woven into the story with lovely dexterity and without passing judgment. It’s no wonder he was a 2010 Pulitzer Prize finalist and 2011 Prix Fitzgerald winner.

A Thousand Pardons has the potential to lead Jonathan Dee to yet another award.