A Thousand May Fall: Life, Death, and Survival in the Union Army 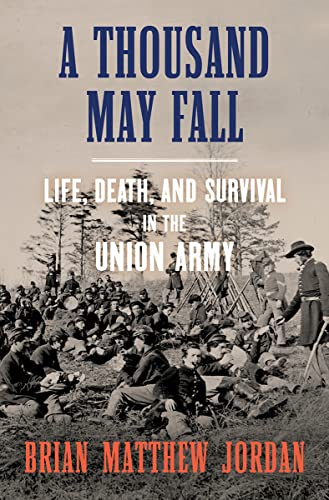 “A bloodied and decimated group of men on crutches came out of the War. Jordan’s impressive history tells their story of courage in the face of danger and undeniable hazard.”

The Civil War was a horrific experience for the American community. More than a million men were killed or wounded. Those who escaped with their lives did not avoid lifelong emotional battle scars. The cannons of war never stopped firing.

Many of the war’s casualties were new immigrants to the United States. Brian Matthew Jordan, a Civil War historian and Pulitzer Prize finalist on the faculty of Sam Houston State University, relates the war experiences of German immigrants who had settled in northeastern Ohio and volunteered to serve in the Union army. Ohio was sharply divided between Copperheads, who thought the war was a dreadful mistake, and Unionists, who would fight and die to maintain the Union. In his new book, A Thousand May Fall: Life, Death and Survival in the Union Army, Jordan uses a broad variety of sources—diaries, letters and unpublished memoirs—to tell the story of one battalion that suffered through the worst of the national catastrophe. His scholarly notes and bibliography are significant additions to the narrative.

The 107th regiment fought in the losing battle of Chancellorsville and wrongly bore much of the blame for the Union defeat. In fact, the battle was a brilliant but risky victory for Lee and his rebel army. The 107th redeemed its reputation the second and third day at Gettysburg, the turning point of the war. They fought valiantly, suffering great casualties over the days of hostilities on the Pennsylvania countryside.

Jordan relates the soldiers’ agony using the letters of those who survived combined with official records of the battle. At times, Jordan’s reliance on phrases from these communications results in choppy prose, but he accurately relays the tenor of those trying times.

The members of the regiment continued to serve through the end of the conflict, redirected to South Carolina and Florida where the greatest threat was from the mosquitos and not from the rebels. In 32 months, they had fought through snow and sand bars in victory and defeat. Finally, they returned to the Buckeye State, not to parades, but to rehabilitation. A bloodied and decimated group of men on crutches came out of the war. Jordan’s impressive history tells their story of courage in the face of danger and undeniable hazard. The Ohio 107th and their counterparts throughout the Union army saved the nation in its time of greatest peril.