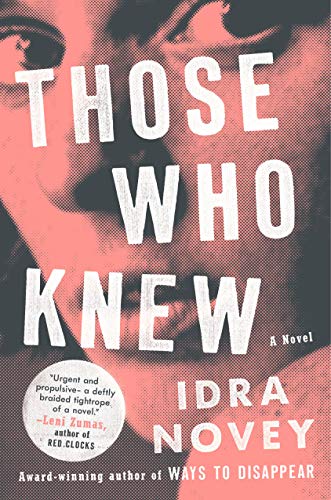 Idra Novey is known for her poetry, translations of Spanish and Portuguese books, Los Angeles Times and Brooklyn Library Literary Prizes for Ways to Disappear. In her latest novel, Those Who Knew, a cast of characters on an island nation confront their past and forge their future.

Novey's writing is lyrical and dream-like with a wide range of characters telling the story at different times from their point of view. She also includes different writing styles from narrative to a journal to excerpts from a character's plays. Each character with its own story arc is emotionally grounded and written with compassion and depth.

"When she licked a flake off her lip, he thought of Byzantium. He was entering the poem, had reencountered its lines here for a reason. He'd finally reached the elusive season it described, the one after disillusionment, after prolonging his youth until he had become its aging narrator, drifting like an ancient, paltry thing, no more than a coat on a stick. . . ."

Those Who Knew is a mystery and a ghost story. It's a story about activism, the idealists, the opportunists, and the power hungry.  It takes on not only national politics but global politics as well expressed through the different characters. It is suprising that in a novella Novey also manages to cover the personal depths of family and friendship.

"Wasn't this one of the ways women unraveled? They failed to marry at the expected age, they got lonelier, stuck on some ex-lover's success while they remained trapped in one demoralizing position after another, their thoughts growing increasingly erratic and unhinged."

This novella is a perfect read in today's political climate. Novey expresses the grand politics of power through these characters’ everyday lives and experiences.

"To win, you have to hide what you have more of than anyone else. Whether you like it or not, that's how the ruthless win."