Those Who Forget: My Family's Story in Nazi Europe—A Memoir, A History, A Warning 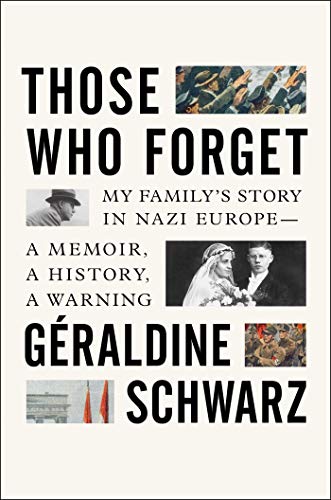 “It took Europe arguably two generations to fully face up to its shameful Holocaust past. Books like this one are needed to make sure that future generations don’t have any such guilt to deny.”

With a father born in Germany during World War II and a mother born in France at the same time, journalist Géraldine Schwarz would seem to have a double-barreled inheritance of Holocaust guilt from both sets of grandparents.

So in one sense, her debut book Those Who Forget: My Family’s Story in Nazi Europe—A Memoir, A History, A Warning is disappointing in that it contains little about her family. The key players are no longer alive, talked sparingly before they died, or didn’t do much during the war.

That, however, is exactly the point of this book, which is translated by Laura Morris. It wasn’t only the top leaders who made Hitler possible, as postwar Germans and French reassured themselves. It was also the ordinary people – the Mitlaufer, or “people who ‘followed the current,” like Schwarz’s paternal grandfather, Karl.

“Their attitude,” she writes, “was shared by the majority of the German people, an accumulation of little blindnesses and small acts of cowardice that, when combined, created the necessary conditions for the worst state-orchestrated crimes known to humanity.”

Karl was a low-level member of the Nazi party in his hometown of Mannheim, in the southwestern part of the country. While he might well have joined only for self-protection, not out of ardent belief, he seems to have had no problem snatching a quick profit when local Jews were forced to abandon their possessions.

In 1938, for instance, he purchased a small oil company from a Jewish family at far below its true value. After the war, when the sole surviving former owner sought reparations, Karl Schwarz didn’t merely refuse. His letters reveal a mind-boggling self-pity and cluelessness.

“I certainly did not put you through anything that could morally justify your [request for reparations],” he wrote at one point. “I have no words for your manners.”

Moreover, Karl and his wife, Lydia, most likely acquired the beautiful Art Deco furniture in their living room through a similar shotgun sale, Géraldine’s father, Volker, told her.

What were her grandparents thinking, Géraldine wonders, as they pawed through the pickings in Jewish apartments? “At the sight of a child’s bedroom strewn with toys and little shoes waiting for the return of their young owner, or the family photos still on the wall . . . how is it possible that these scenes didn’t grab them by the throat and force them to refrain from buying anything?”

Lydia “was more devoted to Adolf Hitler than my grandfather,” although she didn’t belong to any organizations, Géraldine notes. Years after the war, if she would see news stories about problems in Germany, Lydia “would let slip a mild regret—‘That would never have happened under the Fuhrer!’”

On Géraldine’s mother’s side, her grandfather Lucien’s role is murkier. He was a police officer under the collaborationist Vichy government, in a village right on the border with German-occupied France. Whenever Jews and Resistance members tried to sneak across to relative safety in Vichy, Géraldine clings to the hope that Lucien “looked the other way,” as he told his children, instead of arresting or shooting them, as too many Vichy officials happily did.

Otherwise, the family survived largely by the luck of living in small, out-of-the-way villages. When Josiane (Géraldine’s future mother) told her relatives she was marrying a German, “the welcome was rather icy, as some French had suffered terribly from the brutality of the Germans.”

Importantly, Géraldine places her family’s story in the broader context of postwar German and French blame-shifting. As has been reported extensively, both countries buried their responsibility for years, alternately blaming Germany (France) or a few leaders (Germany) and ignoring their own citizens’ complicity and even enthusiastic support for the Holocaust.

Today, Géraldine Schwarz sees horrifying echoes of that Fascist past, with the rise of extreme nationalist, white power, xenophobic, and neo-Nazi movements in Europe and the U.S. Donald Trump’s election as U.S. president “was part of the reason I decided to write Those Who Forget,” she says.

It took Europe arguably two generations to fully face up to its shameful Holocaust past. Books like this one are needed to make sure that future generations don’t have any such guilt to deny.