Those Who Came Before (Fiction Without Frontiers) 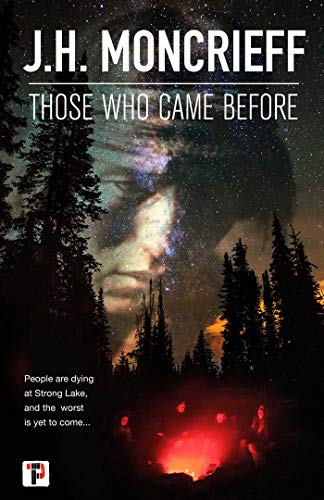 “Those Who Came Before is a tale built on the ‘sins of the fathers’ premise, hinting that DNA may carry more than eye color and an ethnic background. It can also pass along an undying determination to right a terrible wrong and do it in the worst way possible.”

On the day Reese Wallace drives to Strong Lake campgrounds, all he expects is a weekend of camping with girlfriend Jessica, and friends Dan and Kira. What he gets when he awakes the next morning, is the beginning of a nightmare as he discovers the mangled remains of Dan and the two girls.

“Liquid spattered my nose. As I wiped the water from my face, I caught a glimpse of my hand. It was red. Bright red. That wasn’t water.”

He can’t explain how he could sleep with Dan being murdered only a few feet away or why he didn’t wake through Kira and Jessica’s deaths. He also doubts his telling anyone that the night before a disembodied voice told him he wasn’t welcome at Strong Lake will go over too well.

Sure, they’d been on the land illegally, and they’d cut down a tree for firewood that they should’ve have. But that’s no reason to kill three people.

Maria Greyeyes of the Clear Springs Police is certain Reese isn’t the killer, at least not until DNA evidence at the scene indicates otherwise. With Reese under arrest, she still feels there’s something more to this killing.

Reese’s innocence is established when another murder occurs while he’s in custody, but it does little good for the boy who’s beaten and nearly killed by a brutal policeman.

Checking with the Strong Lake Band police, she discovers from Sheriff Kinew that the camping area is part of the reserve but neither the Native Americans nor the state want it.

“Haven’t you ever wondered why Strong Lake isn’t a state park?”

The thought had occurred to her.

“They didn’t want it,” Kinew continued. “And my ancestors didn’t want it either. There was talk that the land was cursed. I challenge you to find one person from our community who’s willing to spend one night in that campground.”

Dating from the time members of the Mescenaki Nation, a group that later disappeared without a trace, there had been other incidences and deaths in the area but no one talks of those, either.

Once recovered, Reese is taken back to the crime scene where he discovers an arrowhead in an area supposedly searched by forensics.

“Initially she thought the object was a rock. “You have good eyes.” Sealing the arrowhead into an evidence bag, she lifted it to show it to him.

The arrowhead no longer looked like a rock. It was as swollen and glossy as an overfed beetle.

I reached through the bars to touch it but before I could, it moved. Something was alive under its surface.”

The arrowhead becomes a trigger; both Reese and Maria begin having visions—of terrible events happening when the Mescenaki lived at the lake, and of something bent on revenge.

Somehow, both the Cree police officer and the white boy are tied to those long-ago desecrations because whatever happened back then and what’s happening now are about to mesh and become tangible in a thoroughly frightening way.

The myths and beliefs of Native American people are a vast area most writers have yet to explore. Only a notable few—among them Owl Goingbeck, Stephen Graham Jones, and Bill Schweigart—are filling this gap.  Now, Moncrieff has made her own mark in this genre and a solid and shocking entry it is indeed.

Though the storyline is a bit irregular, with narratives switching without a warning notation from Reese’s first-person point of view to Maria’s third person to the omniscient presentation of those long-past events, the terror, despair, and confusion depicted in each segment moves the story along without interruption.

Those Who Came Before is a tale built on the “sins of the fathers” premise, hinting that DNA may carry more than eye color and an ethnic background. It can also pass along an undying determination to right a terrible wrong and do it in the worst way possible.

Congratulations to 2018 Kindle Book Review Award winner Moncrief for an entertaining and cautionary thriller warning us how acts of the past can influence the present.