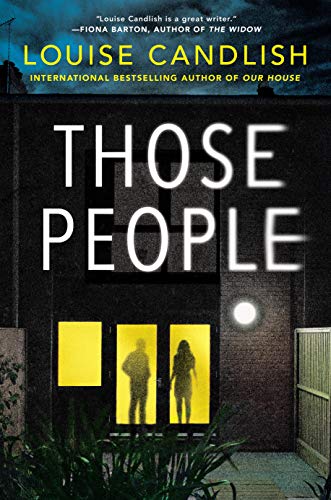 The perfect book for anyone who has ever experienced living on the same street as The Neighbor from Hell, Those People poses the question: How far would you go to get rid of a homeowner you believe is destroying your neighborhood? Once all your legal options are exhausted, what would you do?

British author Louise Candlish writes what is described as “domestic suspense,” a misnomer if ever there was one, as there is nothing placid or homey about the reaction of a domestic society under threat.

Lowland Way is a peaceful, beautiful, upper middle-class street in London, where everyone gets along, all the houses are kept in pristine condition, with top-rated schools nearby for the neighborhood’s gently raised children. To live on Lowland Way is a much desired goal for those seeking a suburban paradise.

Anthony, nicknamed Ant, and Emily Kendall are a young couple with an infant son, Sam, whose semi-detached home is a financial stretch for them, but they are pleased to live on Lowland Way—until they return from holiday to find they have new neighbors.

Ralph and Naomi Morgan, the movers and shakers of Lowland Way, live next door to Ralph’s brother, Finn, and his wife, Tess. Ralph and Naomi find life as perfect as anybody could wish for—until the neighbors move in.

Tess is best described as the salt of the earth, willing to help out her neighbors whenever she can. Tess is not quite as placid as she seems. She walks Naomi’s dogs every morning, picks up the kids in the afternoon, but is beginning to feel she is being taken advantage of. There is also the fact that Ralph is always urging Finn to quit his job and become his partner.

Tess feels that Naomi and Ralph are managing hers and Finn’s lives too much. “It wasn’t that Tess disliked Ralph and Naomi, because she liked them very much—most of the time. It was that she worried about being subsumed by them.”

Tess wants to move to another neighborhood, something Finn is against. In addition to getting away from Naomi’s and Ralph’s well-meaning meddling in their lives, they would also be getting away from the new neighbors.

Sissy Watkins, who has lived on Lowland Way the longest, runs a bed and breakfast in her home as a way to supplement her income after a bitter divorce. A sweet-natured woman who loves the neighborhood, her son and his pregnant girlfriend, and in turn is loved by the neighbors, Sissy’s life is slowly being destroyed by the new neighbors as her B and B receives bad reviews on the Internet because of the new neighbors.

Darren and Jodie Booth are the new neighbors. Loud, boorish, and uncouth, they play their heavy metal music at ear-splitting levels that keep Ant’s and Emily’s baby awake and screaming until the early hours of the morning. When Ant asks Darren and Jodie to turn down the music, they turn it up instead.

“He hurried back to the new neighbors’ door, but his hammering was either inaudible to them or ignored.”

Emily becomes more and more enraged as the weeks pass and Darren and Jodie become more obnoxious. Her relationship with Ant suffers as she feels if he were more assertive, he could sort out the neighbors. Also, there is a possibility that the loud noise from next door is damaging little Sam’s hearing.

Darren opens a used car business out of his house, parking junk cars on the lawn and in front of Ralph’s house. Ralph and Naomi call residents of Lowland Way to determine how to deal with objectionable neighbors.

Ralph is incensed that Darren is parking a trashy orange van in front of his house, and that the Booths house is a wreck with lumber and bags of concrete stacked everywhere, and the scaffolding around the house is old and obviously unsafe.

Appeals to the police and to the Council with their complaints bring no relief. Even calling in anonymous tips to the police that the Booths are drug dealers doesn’t help. The neighbors are increasingly desperate.

When the scaffolding around the house collapses one morning, injuring Darren but killing Sissy’s soon-to-be pregnant daughter-in-law, Tess tells the police that “I have to say that even though it’s the most shocking thing, in a way it feels totally inevitable . . . Sooner or later someone was going to get hurt.”

When the police determine that someone sabotaged the scaffolding, all the neighbors are under suspicion. They hate Darren and Jodie, but no one would deliberately try to harm them, at least not to the point of attempted murder.

But someone did. The question is who among the law-abiding, peaceful neighbors attempted to murder Darren Booth and murdered an innocent woman instead?

A mystery of escalating suspense that questions just how dangerous a domestic dispute can be, and how far can a normal peaceful person be pushed before they snap?

Louise Candlish explores both the desperation of the Lowland Way residents, and the objectionable behavior of a Neighbor from Hell who seems determined to purposely antagonize his neighbors in every way possible.

Candlish doesn’t paint Lowland Way residents as totally justified in their behavior toward the Booths, but doesn’t portray the Booths as a poor, misunderstood couple just trying to make a living who inadvertently rub their neighbors the wrong way. There is nothing inadvertent about Darren’s and Jodie’s actions.

Those People illustrates both the snobbishness of many of those who live on Lowland Way, and their determination to preserve the status quo as well as their sense of superiority to the Booths.

On the other side, the uncivil behavior and refusal to compromise to preserve neighborhood peace is portrayed with an even hand by Candlish.

Though this “domestic dispute” is described without noticeable bias, one sometimes wishes Candlish had come down harder on one side or the other; but domestic mysteries, the good ones anyway, always portray the truth that what is below the placid surface of peaceful lives in a domestic setting is nearly always darker than outward appearances might reveal.