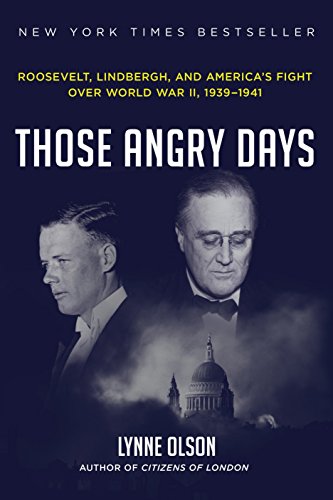 The years just prior to World War II were fraught with tension, and in Those Angry Years Lynne Olson provides extensive detail on the players, both major and minor.

The subtitle is deceptive in that Ms. Olson’s depth of research explains much more than just the relationship between Roosevelt and Lindbergh. She introduces the reader to a vast cast of characters and organizations that actively generated this tension.

The basis of this book is the war between two factors—the isolationists and the interventionists—and how each group sought the following of the American people.

Charles Lindbergh, the man who rose to become America’s hero after his famous flight across the Atlantic Ocean in 1927, was thrown into the limelight when his son, Charles, Jr., was kidnapped and killed in the early 1930s.

The media onslaught never let up, resulting in Lindbergh moving his family to England, where they were given more privacy. During this early period, Lindbergh spent a certain amount of time in Germany where he came to the opinion that the growing issues with Germany displayed that country’s strength, especially in the military—a strength that Lindbergh did not see a problem with.

As Germany’s aggressive tactics tightened across Europe and drew nearer to England, Lindbergh became convinced that the answer to the problem was not war between the two countries, but rather a peaceful settlement of disagreements.

He did not believe that Britain could win a war against Germany. Lindbergh did, however, move his family back to America as the skies darkened. Once back on home ground, he became an undeclared leader in the isolationist movement.

Ms. Olson describes the many dimensions of Lindbergh’s character and how he related to the isolationist movement. A man who did not seek publicity, he often had to be prodded to appear in public. He did make numerous speeches for the cause, but took little advice about his choice of words, and upon occasion found his beliefs rejected by many Americans. Toward the end of the period recorded in this book, his popularity had diminished in the eyes of many.

In the meantime, Winston Churchill exercised all of his energies attempting to convince Franklin Delano Roosevelt of the need for America to come to England’s aid. While Roosevelt sympathized with Churchill, he recognized the antipathy among many American’s who were loath to send American resources to fight England’s battles.

Aiding Churchill at this time were several individuals and organizations that acted, for the most part, deep behind the scenes. The British Security Coordination (BSC), headed by William Stephenson, played a major role in undermining the activities of Britain’s enemies that worked in America, including Germans, Italians, and the Vichy French. Stephenson’s close relationship with his counterparts in England proved beneficial to the interventionist efforts. In fact, his operations were later described as “. . . ‘a virtual textbook in the art of manipulation.’”

Another important participant in the fight for intervention was Lord Lothian, the British ambassador to the United States. Lothian’s many activities and the roles he played are described in great detail, especially his likability by the American people.

There was, however, a growing interventionist movement that urged the president to move forward with the requested assistance. Interestingly, Ms. Olson details Roosevelt’s actions as somewhat wishy-washy. While he was not against the aid, his political mind directed many of his movements, and as the 1940 election cycle appeared on the horizon FDR remained sympathetic but primarily unmoved.

FDR was a skilled orator, and often he presented strong ideas in his speeches—ideas that enthused many Americans who listened to him, and yet those same ideas either never came to fruition, or resulted in watered-down versions of his stronger proposals.

Within FDR’s cabinet, Henry Stimson, the war secretary is described as the most prominent interventionist. “Stimson was the only cabinet member with the moral and political stature to tell the president to his face that he was failing in his responsibility to lead.” This is a pattern of FDR’s behavior that is reflected throughout the book.

Stimson was not the only person, however, to attempt to move FDR to a stronger position. Frank Knox and Admiral Harold Stark each pressured FDR “. . . to order immediate naval protection for all merchant shipping crossing the Atlantic,” as a means to provide assistance to England.

Ms. Olson describes a number of battles fought by both sides with a focus on organizations such as America First (isolationist) and the Century Group (interventionist) and the wide array of well-known members in each group. But clearly as the book progresses, it is apparent that the interventionists are winning over more of the American people from their previous isolationist positions.

One of the most interesting aspects of this book is Ms. Olson’s detailed introduction of many of the members on both sides of the argument. Characters such as Dorothy Thompson, political columnist, who provided ongoing criticism of Charles Lindbergh and his defense of Germany; and Amy Elizabeth Pack, who Ms. Olson describes as:

“Tall and slim, with honey-blond hair and green eyes . . . ex-Washington debutante . . . known for her charm, strong will, passion for adventure, and sex appeal, which she put to good use in her work for British intelligence” were both interventionists with their own agendas. The details of such additional characters peppered throughout the story on both sides of the issue make for a more interesting read.

One of the most interesting individuals she discusses throughout the book was Wendell Wilkie, the 1940 Republican candidate for President. Wilkie was not the preference of all GOP members. In early 1940 just before the convention, Wilkie had less than 3 percent support of GOP membership.

Wilkie, although considered an interventionist, went on to secure the nomination over preferred candidates Thomas Dewey and Senator Robert Taft, in large part because the opinion of Americans rapidly shifted from isolationism to interventionism as the war in Europe pushed forward with the fall of France. Hitler’s conquest could be said to have helped Wilkie win the nomination.

Although FDR considered Wilkie to be a somewhat formidable candidate, history proved otherwise. Ms Olson provides detail upon detail regarding the 1940 election and how the winds moved back and forth between the parties until the historical election of the only president to serve a third full term.

Anne Morrow Lindbergh shares the limelight in this rendering through her many diary excerpts and publications. One sees the frustration she experienced as she watched her husband be torn apart by much of the press. Her attempts to set the story right every time she read what she considered to be an unfair account of her husband’s defense of isolationism, were frequently met with severe criticism and scorn, resulting in confusion on her part. How could the press not see the same man that she saw, she wondered.

Once the war began, Charles Lindbergh took part in a number of consulting activities in the Pacific Theatre, and by the time he returned, he found Anne had become much more independent than she was before he left. They remained together, but Anne had found her own personality and established her own circle of friends.

Of course, by the end of this book, the Japanese attacked Pearl Harbor, and the issue of intervention versus isolationism became moot. Ms. Olson ties up the loose ends of the people’s lives she describes very neatly, giving the reader a sense of what was right with the world as America began a new era.