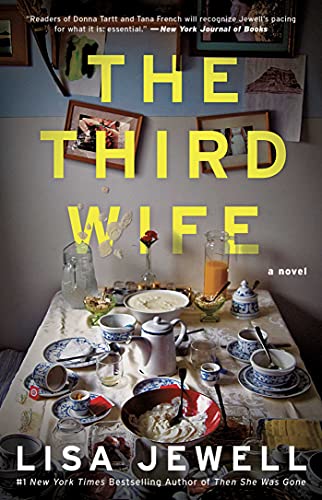 “. . . the issue was that even though all he wanted was for everyone to be happy, he kept doing things that made people unhappy.”

The “he” in question is Adrian Wolfe, protagonist of Lisa Jewell’s latest book, The Third Wife. And no one it seems is quite as unhappy as Adrian’s latest wife, his titular third.

Maya Wolfe is introduced in the novel while drunkenly stumbling down a street in 3:00 a.m. London. Her thoughts, initially full of colorful lights and laughter, darken when she contemplates returning home to her husband. Even then, it is shocking when she steps in front of an evening bus.

Though there are a couple of story threads in The Third Wife, it is at its heart an exploration of the underside of a seemingly perfect marriage and family. Things aren’t always what they seem, especially when one is determined to travel with blinders on, Adrian’s modus operandi. With two ex-wives and five children in the picture before Maya entered his life, Adrian has complications aplenty.

It is fortunate (for him) then, that he’s self-absorbed and rather shallow. Jewell is taking a risk in creating an unlikable and rather unreliable narrator in Adrian. Determined that what is good for him is good for every one else, Adrian glides from one family to the next, assuring himself that everyone has goodwill about the choices he makes that effect them all.

Following Maya’s tragic death, Adrian is at a loss—he is husband to no one for the first time in 24 years. Looking through his eyes, the people in his extended families, all of whom had cobbled together a single family unit, are all devastated by the loss of their latest member.

It is only as the story progresses and the thoughts and relationships of the rest of the family are revealed that cracks begin to show in their solid foundation. Perhaps not everyone was overjoyed to have another mother—or the sixth child she was trying to conceive with Adrian.

It is this dysfunction that drives the second story thread of The Third Wife: a psychological thriller. Following Maya’s death, evidence is discovered that throws the cause of her death into question and implicates someone close to the family.

This aspect of the story was very successful. Adrian’s search for the truth about his wife’s death becomes the search of the reader. That Jewell is an accomplished writer is evident in her careful crafting of suspense. She is still tossing out red herrings as the novel nears its conclusion; it is only in the final pages that what really happened is revealed and the clues scattered throughout the story become obvious. The suspense is comparable to Gone Girl, but with a better and more believable third act.

The Third Wife is a summer gem. The story is complex, and most of the many characters well drawn. A reader who is expecting a rote Women’s Lit family drama might find the book slow; they would be wrong. Jewell has taken the time to give depth to her characters and make the story realistic—there are no easy answers and no absolute good guys (or bad guys, for that matter). Readers of Donna Tartt and Tana French will recognize Jewell’s pacing for what it is: essential.

One caveat: don’t skip the epilogue. Had The Third Wife ended at the last words of the last full chapter, it would have felt weak and unsatisfying. The epilogue allows Jewell to pull out a rational denouement for the story and redemption for her unlikable Adrian. Well worth reading!