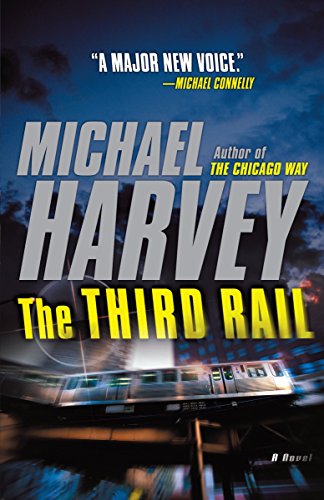 “I slouched against a rusted girder Nelson Algren would have been proud of, about a block from the corner of Lake and Wabash.”

The Third Rail is an excellent mystery set in Chicago, with snappy, economical dialogue; near-perfect pacing; and a complex and unusual story—one that deeply engages the reader’s emotions and intelligence.

The story begins at Chicago’s Southport elevated station as a man called Robles shoots a woman in the temple and runs from the station and through a snowy alley.

Harvey’s private eye, ex-cop Michael Kelly, on the same platform, chases the killer into the dark alley, following fresh footprints in the snow that lead through the alley. But a thug jumps from behind a Dumpster and cracks a pistol over Kelly’s head, knocking him unconscious.

Robles, a couple of hours later, at a downtown apartment, uses a rifle and scope to randomly murder a young woman on a passing elevated train.

Chicago is in the grip of terror, as police, FBI, and the city government mobilize to prevent any further killings, but also to salvage the city’s image.

Meanwhile, sitting with the police in Starbucks near the Southport station, Kelly gets a call on his cell. It’s the killer taunting him and proving that he has personal information about Kelly.

Kelly is shocked. Who is this killer? Or are there two, as Kelly believes from the incident in the alley? What could be the motive? How could these crimes be connected to Kelly?

Questions like these pull the reader into a complicated tale involving a secret trauma from Kelly’s past, corrupt Chicago politics, intrigues in the Catholic archdiocese, covert U.S. government actions, terrorism, corporate evil, and more. Through it all, the story remains crisp and clear.

“He’d been in Homicide for almost four years and carried the weight in his shoulders, the dry sorrow in his face.”

“She was thirty-five, maybe forty, with nervous eyes and a tough mouth that would have been attractive if it wasn’t so disapproving. I’d seen it before. Battle fatigue from too many years in the old boys’ club.”

Chicago is also a character in The Third Rail, as Kelly and others wind their way through seedy hidden places—a dilapidated slum high-rise apartment complex; a transit access door hidden under a highway overpass; an ancient, dank stretch of subway track—all settings ripe for murder.
The Third Rail is a story so engaging that the reader will zip past a few unlikely happenings and coincidences. None of these are of great importance, though; The Third Rail is a top-notch mystery.

This story might not be for all mystery fans, though.

An NPR interviewer introduced Harvey by calling his prose “prototypically noir.” One reviewer calls Harvey’s work “Windy City Noir.” This reviewer does not believe, however, that Harvey himself would accept that trendy moniker.

Noir often has a seedy, morally ambiguous, detached protagonist. Michael Kelly is none of these. He leads a fairly clean-cut life (though he drinks and brawls a bit), he lives in a pleasantly gentrified urban neighborhood, and he has a strong sense of right and wrong. He has a girlfriend (who is a judge) and friends, such as the naive young computer geek, Hubert Russell. These relationships make him vulnerable, and in The Third Rail he puts those close to him in danger.

Even the dark, foreboding settings brought to life with Harvey’s economical prose don’t elicit a deep, gut-wrenching noir mood—most likely because of their short, precise descriptions.

Noir or not, though, The Third Rail will entrance mystery fans. Even hard-core noir fans should give it a try.

In fact, as The Third Rail ends, just when the reader may think that the story has been neatly tied up in a non-noir manner, Harvey manages to leave readers truly frightened and uncomfortable by keeping a terrifying loose end unresolved, which—as Harvey has hinted in an Amazon interview—leaves the story open for a sequel that will be one hell of a thriller.