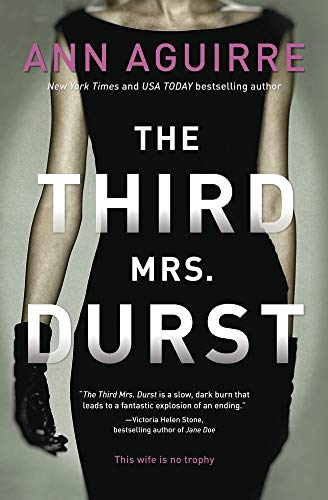 “It does not take long for Marlena to realize that her loving husband is a man of many demands, and she wonders if tragedy happens in threes.”

If revenge is a dish best served cold, then in her recent book, The Third Mrs. Durst, Ann Aguirre has created a durable protagonist who encounters myriad hardships that she is destined to overcome in order to embrace that revenge.

Marlena Altizer, a young woman from the Kentucky hills with few social graces but enormous vision, often reminisces about her childhood, her mother’s addictions, and her step-siblings, with special attention to her stepsister, Dee, who abandoned the family as soon as she could. Marlena follows in her sister’s footsteps, abandoning her family, and seeking a better life for herself.

In search of this better life, Marlena is identified by a talent scout and quickly becomes a world-class model. It is through this position that she meets and subsequently marries Michael Durst, one of the wealthiest men in the world. A marriage made in heaven . . . or is it?

It does not take long for Marlena to realize that her loving husband is a man of many demands. His first two wives both died tragically—the first, Leslie Talbot, committed suicide; the second, Deborah Neuman, died in an automobile accident after only one year of marriage. Marlena wonders if tragedy happens in threes.

The marriage moves forward, and Michael’s hold on Marlena moves through a series of encounters, each becoming more violent, demanding her submission to his every wish.

As the story progresses, Aguirre drops several crumbs of information designed to lead the reader down the path of confusion. Did Marlena enter this marriage totally unknowing who and what Michael Durst is? Or did she enter knowing full well that he is a monster who deserves to die, and she is just the person to put a plan into action to achieve this goal?

She is kept a virtual prisoner in her million-dollar condo. Enter Vin Rivera, her daytime guard and a man of few words. Marlena sees Vin as a player to help her achieve her goal, but the reader remains in the dark as to what that goal is. Seducing Vin is easy for her, and she quickly gets him on her side.

In spite of Michael’s death grip on Marlena, he allows her to meet with Jenny, Marlena’s closest friend, and although Michael has controls on Marlena’s communications, she is able to establish a code for sharing information with Jenny. Again, Marlena’s plan is taking shape, but it is not until the last third of the story that the reader really gets a sense of what that plan is.

One of Michael’s goals is to secure property from a wealthy, elderly woman, Joanna Van Houghton, and he uses Marlena to achieve that goal. Marlena, however, is able to develop a tight friendship with the woman, and she confides in Joanna about Michael’s erratic and violent behaviors. She thus brings another source into her plan.

About halfway way through the story Marlena’s younger sister, Ariella, appears on the scene, messing up Marlena’s plans. It is at this point that Michael discovers that Marlena even has a sister, something he knew nothing about. In fear for Ariella’s safety, Marlena provides her with unlimited funds and ships her out of the country, presumably away from Michael.

The energy of the story occurs in the last 100 pages, when Marlena’s plan to destroy Michael is set into motion. The pace picks up, and Aguirre inserts twists and turns that keep the pages turning.

Throughout the story, although Aguirre moves the plot along well, it often feels as if things happen too easily for Marlena—like becoming the most sought-after model in the world shortly after entering the very competitive field, or undetected sex with Vin in the backseat of Michael’s limo, just luckily out of sight of his cameras.

It should be said up front that all of Aguirre’s positive characters are beautiful, strong, and resilient, while her negative characters, with the exception of her antagonist, Michael Durst, are ugly and psychotic.

In creating Michael, Aguirre does an admirable job of developing a dastardly antagonist. There is nothing to like about him, and the reader will wonder how in the world this woman can ever get away from her husband and her prison.

A few questions rise to the top, however, including how, with all of his resources, Michael never knew of Marlena’s background? Why would Michael allow Marlena’s friendship with Jenny to continue?