A Third Decade of Guess Images 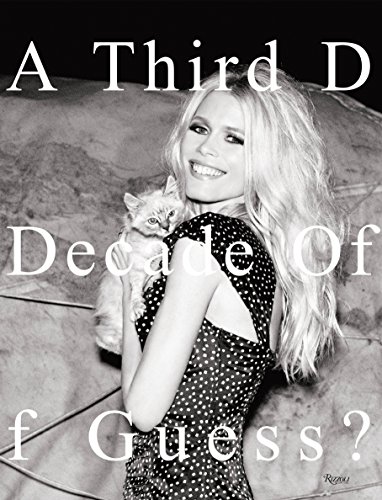 “Kudos to all involved in A Third Decade of Guess Images.”

If there were such a thing as a fashion version of the game Pictionary, A Third Decade of Guess Images would stand in for the words “coffee table book.”

This book is such an extraordinarily over-the-top presentation that it practically creates a new book supercategory. One must remember that what once started in 1983 as an unknown manufacturer of denim jeans is now a world unto itself in the apparel business.

Paul Marciano, creative director for Guess, has been rewriting the script for advertising since the inception of the company. He raised the bar and truly can be credited for truly discovering some of the greatest photographers and models of the late 20th century and into the 21st. The man was clairvoyant when it came to talent as well as the future of print advertising—which still bears his imprimatur some 30 years later.

This epic tome is filled with some of the most iconic images from the company as well as quotes and mini interviews from models and photographers spanning the history of the company.

The rendering of the volume is superb in its simplicity and originality and reflects Mr. Marciano’s vision. One does not have to be a fan of Guess nor a model or photographer in order to enjoy the book. The reader simply has to be engaged with the body aesthetic of Marciano’s work that has grown substantially over three decades.

The appeal is multifold since the book can be experienced on so many different levels. Our reaction can only be one of awe due to the quality of presentation, its sheer size, and the excellence of the photography contained between the pages. Kudos to all involved in A Third Decade of Guess Images.