The Third Coast: When Chicago Built the American Dream 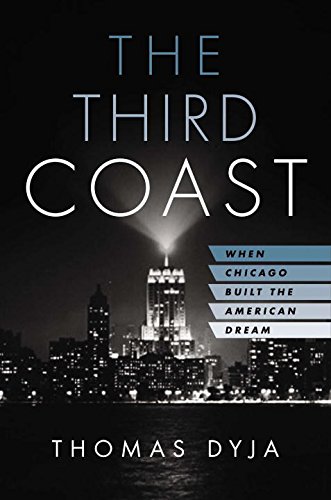 “The Third Coast mirrors the place it chronicles . . .”

Places are defined by many things: the attributes of the natural environment, the built environment, the indigenous people, and the distinction and/or shame the exploits and conduct of those people may bring.

Chicago exemplifies this model of place definition. Fronting on Lake Michigan informs the designation of the place as The Third Coast, which happens to be the title of Thomas Dyga’s searching and at times scintillating survey of the role of this place in shaping the soul of the country. The author asserts that the story of Chicago is the story of the country, and that to understand America you must understand Chicago.

Chicago starred in America’s industrial leadership in the middle third of the 20th century, the period that previewed extraordinary innovation, when economic power migrated from the industrial heartland to the coasts—finance and media in New York; innovation and entertainment in California.

Indicative of Chicago’s leading stature is that between 1932 and 1960, Chicago hosted nine of sixteen political conventions in which the Democratic and Republican parties elected their Presidential candidates.

Just as the place of the United States of America exerts such a profound influence upon the common perception of possibility, the attributes of place define Chicago, its people, and therefore, the influence of Chicago on the country.

Thomas Dyja writes, “Geography bonded Chicagoans . . . its overwhelming flatness stranded everyone. The city’s grid ordered it all. In the same way, towering success mattered less to the vast majority of Chicagoans than just being “regular:” a house . . . for your kind of people; kids safe and in line, and the same with the wife; . . . Living in America’s meeting place, Chicagoans developed a unique understanding of what their fellow citizens have in common, and made the most of it.”

Chicago is known for its work ethic—“The City that works” is a recent place brand message—and location centrality—as evidenced by O’Hare Airport in the middle of the 20th century being the busiest in the world. Notwithstanding its worship of “being regular” in certain ways Chicago is a place of extremes, both honoring extraordinary architecture and fostering “the nation’s most impressive public housing system.”

Chicago’s commonality of regularity evolved out of the very dichotomous diversity of the people who were drawn to that place, for these people were, “separated by their skin colors, forms of worship, ethnicities and wealth.”

And seemingly contrary to the dominant “being regular” value, after the Second World War, “an explosion of creativity and destruction and a float of new forces energized Chicago: migrants and émigrés; planners, architects and designers, groundbreaking musicians and actors; innovators in technology and communication; leading minds in education, religion and philosophy; European intellectuals and dirt-poor southern blacks.”

During this critical middle third of the 20th century, Chicago emerged to be “the nation’s primary meeting place, market, workshop, and lab.” Concurrently, the story of Chicago is “also the story of how America’s uniform culture came to be. As New York positioned itself on the global stage and Hollywood polished the nation’s fantasies, the most profound aspects of American modernity grew up out of the flat, prairie land next to Lake Michigan.”

Thomas Dyja asserts that Chicago has been the place that “produced much of what the world now calls ‘American’” The litany of American-defining cultural contributions extends from Playboy to high-rise architecture; music ranging from gospel to jazz, to urban blues to rock and roll, both improvisational sketch comedy and the restrictions of the country’s last great political machine; the Great Books and modern photography, the Nation of Islam and the atom bomb; the promulgation of McDonald’s Golden Arches leading to the dispersion of fast-food; political corruptions and conventions of all kinds; geodesic domes and Ebony magazine; powerful labor interests and a vast “pool of cheap talent;” mail order and soap operas.

Chicago is the place, the author asserts, where “the real struggle for America’s future” was waged. Notably, the very American values—of aspiring—home ownership, predominantly in the suburbs; social stability—were shaped and founded in Chicago.

Chicago manifested the worst of the country’s 20th century urban initiatives, resulting in “blight, a vague, pre-scientific term,” which “allowed politicians, journalists, and civic do-gooders to rail against the physical effects of poverty without having to address its uncomfortable causes.” The physical evidence of blight was “the splitting degeneration of neighborhoods, the surface rot of broken windows, collapsing buildings, and rats that defined the slum.”

The Chicago political system—both characterized by concentrated power, prioritizing special interests over the common good, dominated by the machine, the church and the Mob, and also the place of political ascendancy of the country’s president—in certain ways epitomizes the American political process. These powerful interests, “corrupted one another, and protected their power above the needs of the people they served. The game was rigged. Most regular guys knew that and just tried to get theirs.”

Thomas Dyja tells his story through exploring the personalities, aspirations and limitations, work and accomplishments of Chicago’s varied cultural leaders, during the period chronicled in his book. The Third Coast mirrors the place it chronicles: at times eclectic and discordant; narrow in focus and vast in its extended reach—plain spoken as well as high-minded.

This book will appeal to those interested in culture and sociology, place and urban affairs, and, of course, Chicago.