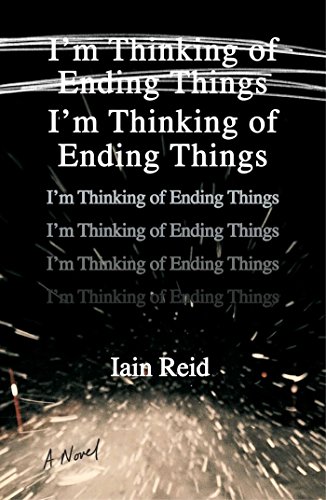 Two lonely graduate students find each other during a trivia contest. They start dating and have sex. Then the boy, Jake, takes the big step of inviting the girl to meet his parents. But this hopeful story has a creepy undercurrent: The female narrator is convinced that she will need to break up with Jake. He has odd habits, and we gradually learn that his family is a little creepy.

The young woman becomes a bundle of nerves. A strange caller has her cell phone number, and she finds herself in circumstances that slide from odd to dangerous. A man hovers at the edges of the worsening drama. This is the set up for Iain Reid’s intellectual thriller, I’m Thinking of Ending Things.

While the plot of I’m Thinking of Ending Things makes the book a page-turner, it is Reid’s confident, genre-bending narration that is the book’s great strength. The novel is written as a monologue in the voice of the female protagonist, which allows Reid to tell two stories at once: First, a present-day story of a hopeful romance that degrades into a desperate night in a secluded school; second, a sad and disjointed story of the narrator’s past and the fears it has put into her as an adult.

The introspection and melancholy of Reid’s narration does not bog down the book because of Reid’s short sentences and vernacular narration. The narrator for example, discusses her rationale for breaking up with Jake this way:

“He’s smart and handsome, in his way. If he were an asshole or stupid or mean or anything, then it would be his fault that I end things, kind of. But he’s not any of those things. He’s a person. I just don’t think the two of us are a match. An ingredient is missing and, if I am being honest, it always has been.”

The narrator also treats us to this real-politick pearl of wisdom: “Relationships gradually sour like milk, end them before they’re sickening.”

I’m Thinking of Ending Things is much more a suspense novel than a “relationship” novel. The reader is propelled forward more by the strange and increasingly frightening details at the edges of the narrative, not the misfiring romance at the center of it. And Reid turns the final third of this short novel into a can’t-put-the-book-down thriller.

It is hard to compare this book to many others—perhaps Stephen King’s most realistic and literary works, i.e., Misery, and Michael Faber’s Under the Skin come closest. Reid’s plot and style are also reminiscent of the terrestrial episodes of the original Twilight Zone. All of these storytellers play on psycho-strangeness in a world void of phantasms. If you really want to scare an adult reader, keep your narrative firmly ground in reality.