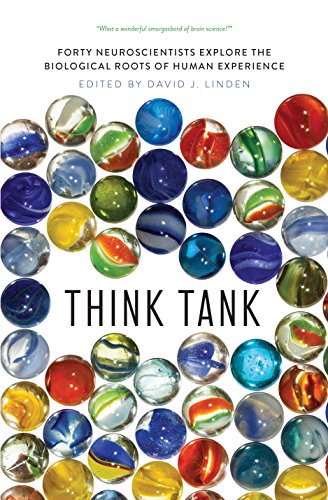 “Swiping our smartphones reorganizes the brain’s sensory-motor maps for the hand. Screen exposure in children is similarly consequential given that hundreds of new synapses form every second, a dynamic process easily interfered with when mediated images replace human interactions and real-world vistas.”

If given the opportunity to tell the world anything, what would you want it to know? This is the question that Johns Hopkins neuroscientist David J. Linden asks of 40 leading brain researchers: “What idea about brain function would you most like to explain to the world?”

As a whole the answers defy categorization. But that only makes this collection of short essays an adventure and source of surprise. The contributors’ expertise ranges from comparative anatomy and molecular genetics to human behavior, evolution, and early brain development. The essay are relatively short, only a few pages each. This makes it easy to grasp the central idea and then ponder its impact.

Thankfully, the book never wades into philosophical territory. Its aim is pragmatic, and Dr. Linden is mindful that in today’s age of endless brain facts, “thoughtful people have become understandably skeptical, having been inundated by a fire hose of neurobullshit.” Setting the tone, the opening essay is titled “Science is an ongoing process, not a belief system.”

The first of five sections concerns how the brain is formed and changes over time. We learn how genetics determines personality; how billions of neurons are nevertheless wired up according to simple rules; why a 12-year-old doesn’t just sprout new hair but is also forming, and being formed by, new neural connections; and how life experience and addictive drugs both change the brain in surprisingly similar ways.

The essay on plasticity reveals how “tool use can instantly rewire the brain,” surely a fact most people will startle to learn. In violinists who practice for hours a day, for example, the cortical area representing the fingers expands tremendously. A similar thing happens in newly blind individuals as they learn braille: the cortical map of the “reading finger” expands into the now unused visual cortex.

As for being “instant,” readers may be alarmed at learning that repetitively swiping our smartphones also causes plastic reorganization of the brain’s sensory-motor maps for the hand. Screen exposure in children is similarly consequential given that a two-year-old child has twice as many neural connections as an adult brain. Hundreds of new synapses form every second, a dynamic process easily interfered with when mediated screen images replace human social interactions and real-world visual scenes.

This is the downside to experience—dependent plasticity because any kind of experience can affect brain development, not just positive ones. Young children who are not read to grasp language more slowly than those whose parents do read to them. They also have “poor lifelong literacy.” And actively being engaged versus just passively watching, “sculpts frontal circuits in different ways.” The point is that “neurons are wildly grasping for information,” which they cannot do when one is staring at a screen.

An “insidious form of plasticity known as incubation of craving” sets in once an addicted person tries to quit. The drug can be anything—from cigarettes, to more pernicious substances, to behavioral dependencies such as gambling and screen addiction. Weeks after abstaining, “the craving becomes more and more exaggerated,” which is why quitting and staying that way is so difficult to achieve.

Another essay in a section on sensing and anticipation proclaims, “You have a superpower.” That superpower turns out to be vision, and a picture worth “many times a thousand words.”

By seeing the tiniest variations in facial expression and posture we are able to read the minds of animals and other people. To show how profound the ability to see is, the reader is asked to imagine a fictitious world populated by aliens who have no concept of what it is to see. Confronting one frustration after another in trying to explain the experience, and ultimately failing, “you begin to realize that you don’t understand seeing either.”

Elsewhere readers learn that pleasure always depends on comparisons, and that “there is no need to save room for dessert.” It will be just as pleasurable as long as it is better than what came before. Another surprise is how taste plays dual roles. There is conscious flavor that everyone is familiar with, and then a powerful unconscious one tied to anticipation. The latter orchestrates an array of metabolic processes without which we would fail to absorb nutrients and starve.

An intriguing book to delve into essay by essay.