Things We Do in the Dark: A Novel 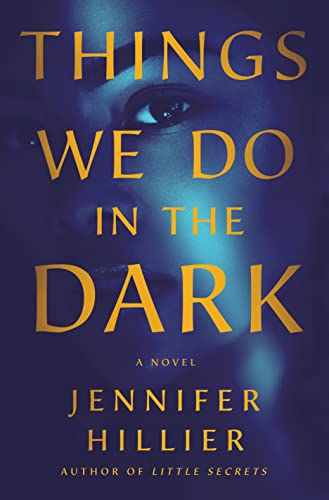 “Hillier develops characters who are three dimensional and feel real to the reader. . . . [creating] questions that demand the reader turn the page to get the answers.”

When Paris Peralta is discovered in her bathroom with her dead celebrity husband Jimmy in the bathtub, it doesn’t take long for the police to determine who the murderer is.

And it doesn’t take Paris long to realize that the secret she’s been hiding for almost 20 years is perilously close to being exposed.

Thus starts Jennifer Hillier’s new novel, Things We Do in the Dark. Paris just returned to her home in Seattle from a trip to Canada, when she discovers her husband’s body and is immediately charged with murder when his personal assistant, Zoe, finds her with Jimmy’s body and assumes the worst.

But can things get worse for Paris? Indeed, they can when her own history creeps up behind her.

Hillier takes the reader on a roller coaster ride, moving back and forth over two decades when another murder and a separate death occurred. But everyone in Paris’s current life is unaware of her previous life as Joelle (Joey) Reyes, a young teenager whose mother, Ruby, is more interested in her life than she is in Joey’s. And Ruby’s life consists of many men, lots of whom find Joey more alluring than her mother.

Life for Joey and Ruby becomes particularly complicated when Ruby’s most recent lover, wealthy (and married) Charles Baxter is murdered, and Ruby is charged with the crime.

And so, when Paris (aka Joey) is charged with murdering her husband, Ruby, who has been in prison and is about to be released on parole two decades after her crime, recognizes Paris for whom she really is: her daughter Joey. And Ruby knows exactly how Joey covered her own life, got rid of Joey, and became Paris—a life Paris does not want exposed.

Blackmail becomes the name of the game when Ruby demands a healthy piece of Paris’s inheritance to keep her mouth shut about how Joey shed her life and started anew.

Hillier deftly moves back and forth between the lives of Paris/Joey to paint the picture of how Paris’s previous life affected her, driving her old life into hiding through lies. But Paris knows it won’t be hidden for long.

In moving back and forth through the two lives of Paris/Joey, Hillier paints a clear picture of sexual abuse thrust upon a young woman and the paths she takes to shed her old skin and grow a new one.

Hillier develops characters who are three dimensional and feel real to the reader.

Zoe, the PA to Jimmy Peralta, is designed as a questionable character—Do we believe she is helping or hurting Paris and what’s in it for her? Elsie, Jimmy’s long-time friend and lawyer, takes on Paris’s defense but is she really helping Paris or herself? Drew Malcolm, the love of Joey’s life, thought Joey died many years earlier, only to find Joey in the face of Paris, Does he stand by her as her life seems to be ready to crumble or does he abandon her as she did him?

Hillier creates questions that demand the reader turn the page to get the answers.

In spite of the many back-and-forth scenes, Hillier has crafted a strong story that will keep the reader intrigued right up to the very satisfying ending.