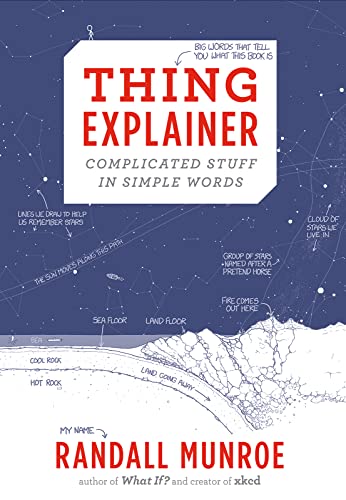 XKCD comic artist Randall Munroe has created a book to explain how things work. Leaving behind technical jargon, he does his best to describe the inner workings of washing machines and dryers, space stations, and airplanes, except that in jettisoning jargon he also abandons the terms “washing machine,” “dryer,” “space station,” and “airplane” in favor of “boxes that make clothes smell better,” “shared space house,” and “sky boat.”

Interestingly, Munroe was unable to come up with a more simplified and descriptive way of naming a computer. While “boxes that make clothes smell better” is a very descriptive term for washing machine and dryer, not knowing what an item is called and then describing how it works by calling things “water mover” or “power spinner” is not going to help someone who realistically wants to understand the gearboxes and other parts.

This book appears to be an attempt on Munroe’s part to challenge his own creativity in describing things in the simplest terms while at the same time also confusing them. Learning terminologies are crucial not only for vocabulary building but for being able to discuss any of the things in the book with someone else. A better exploration of things and how they work would be the website Howstuffworks.com, though it won’t be ad free or as adorably illustrated with occasional squirrels or stick figures.

There are a few pull-out pages, such as the Periodic Table, now called “The pieces everything is made of” though this is a misnomer since not everything is made up of everything listed. This section is also very confusing; few, if any, of the elements are identifiable by the text or line illustrations Munroe has decided to use.

In most of the illustrations the text is small and hard to read despite the slightly larger format of the hardcover book itself (9” x 13”) and the illustrations often are small and detailed depending on the thing explained, making it difficult to really see the nitty-gritty of the internal workings of some items, such as the computer.

Overall, the book is a set of schematics of various items with no rhyme or reason, randomly juxtaposed on the pages such as the “machine for burning cities” (atomic bomb, presumably) next to the “water room” (modern day bathroom with toilet, bathtub, and sink). While there is text at the top of each of the schematics to explain the overall purpose of the item, very little historical detail is given, nor is the real name of the item itself divulged.

Though the drawings are intricate, the real thought behind this book is lacking. While not knowing the exact name of something does not mean you can’t grasp how it works, it does mean you are left without the words to describe it. Someone who is meant to be a teacher, or who is intended to teach such as Munroe is with Thing Explainer, ought to know better. He should be providing the proper vocabulary along with the simplified understanding that he seeks to divulge to anyone wishing to know how things work. While Munroe’s Thing Explainer may have received glowing blurbs from many top sites and magazines, it does not hold up in the shine of all those nice words.

Fans of XKCD may think this is a brilliant showpiece of Munroe’s, but it falls flat. People who already understand how these items work and what the parts are called may get a kick out of Thing Explainer as a novelty or ironic work, but people who seriously want to understand how things work would do better consulting other work.