The Thief: A Novel of the Black Dagger Brotherhood 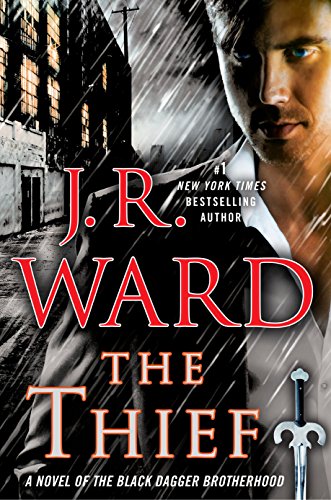 “Then again, true love required so much more than the boy-meets-girl stuff—and mutual attraction was the easy part.”

In The Thief, J. R. Ward’s latest Black Dagger Brotherhood story, cat burglar Sola Morte’s hidden life is challenged when she is tracked down by relatives of the vampire crimelord she loved and left.

He is on the brink of death, and his cousins believe that only she might provide the impetus for his recovery from drug addiction. Sola isn’t so sure. Despite her ignorance of his true nature, the human woman is no fool—Assail is a dangerous being, no matter what species he claims. She has her grandmother’s well-being to look out for, as well as the state of her own heart.

And, oh yeah—there’s a threat to the throne from a new old enemy.

J. R. Ward remains a master of quick, realistic repartee and shows herself once again to be a lovely, evocative writer: “Cocoons of homeless people dotted the barren landscape, their bodies curled up in filthy blankets such that they became boulders on the face of poverty’s moon. And all around, loose newspapers danced about the countless abandoned bottles empty of booze, like children showing inappropriate levity.” Her interactions between the brothers are as humorous as usual, and they continue to feel like guys you would love to hang out with.

Sola is a fierce woman, as Ward is wont to create. A former thief in hiding, she is fully able to protect both herself and her beloved grandmother, and finding out her lover is of another species entirely is barely enough to knock her back a few steps. She’s ready within minutes to challenge anyone who would harm her vovo (grandmother), and really more concerned about the lies she’s been told anyway.

And therin lies both the strength and the weakness in this novel. It’s no mistake that the danger to the Brotherhood is mentioned last, as it is clearly of the least interest to Ward. There’s a couple of mentions of the patrician vampire who thinks he can toss the king off his throne, and one seriously icky sex session with a powerful book of dark magic, but that subtopic is fairly underdeveloped.

Another substory about arms dealers is rather inexplicably wedged into this book as well. It goes nowhere and means very little to the text of the story, aside from allowing Sola to show her thieving skills.

With The Thief, J. R. Ward returns to the exploration of the nature of love and lasting relationships that has informed her Black Dagger Brotherhood novels for the last few years. While her early books moved at a breakneck pace and were very sexually oriented (though by no means empty erotica—she’s always had a good ear for description and snappy patter), Ward’s latest books are those of a mature writer whose characters have been allowed to mature alongside her. Sex is still a part of the narrative, but relationships are more important.

The original brothers are all mated—for life—as are many of the secondary characters introduced in the early books. Now it is time for them to face the reality of day in day out relationships and often the realities of having and raising a family.

Ward’s latest books are full of earnest people (human, vampire, and a few other species) trying to be good to those they love. Intrigues and wars of various sorts have been put on the back burner as she has fun playing with these characters, showing them to be loving, fiercely protective, flawed beings, ones who are very earnest about moving beyond mere sexual attraction and “boy-girl stuff.”

Sola’s introduction to their world is a scenario Ward hasn’t explored in a while, and it’s entertaining to “watch” Sola enter the Brotherhood strongholds and realize that they aren’t that different than the people she’s used to. Yeah, they have fangs at times (sexy and war times), but they play foosball, have shopping addictions, eat regular food and read Sports Illustrated: “So normal, she thought. It was all so . . . just average and everyday.” In fact, lose the fangs and the Brotherhood and a big, strong, loyal crime family aren’t all that different.

One suspects Ward is losing interest in the vampire angle—her recent foray into straight contemporary fiction, the Bourbon Kings saga, and her upcoming firefighter saga would seem to bear that out—but if one can roll along with the character development and family story in The Thief and not worry too much about action (except that which happens in the sheets—Ward is back on form with that angle), this novel is very entertaining.

Vampires singing Moana songs and accidentally finding themselves in fluffy pink pajama bottoms? Oh yeah. If hardcore sex and violence is where one is at . . . maybe give this one a pass. There are hints that the quick-paced action scenes that Ward writes so well are on the horizon for a later book. For now? Have fun.