They're Gone: A Novel 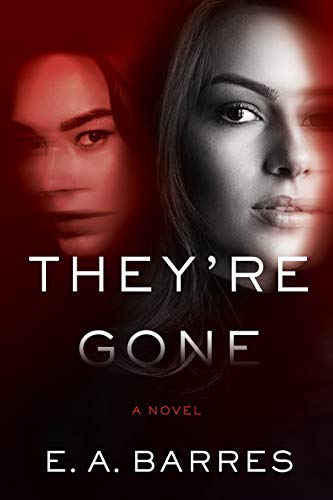 In a single night, two women are widowed, their husbands killed in the same way.

Their reactions couldn’t be more different.

In northern Virginia, freelance editor Deb Linh Thomas is grief-stricken and disbelieving as two policemen tell her Grant Thomas was killed as he was being robbed.

“Her husband’s soul ripped away. The abrupt, violent, permanent change to everything she knew. Deb had known Grant would die someday, but it was impossible to accept. Grant had been murdered , and he’d been powerless to stop it.”

“For a moment, the pain from her bruises was forgotten. Cessy felt the room darken, her mouth dry. First grief, then relief. The two emotions wrestled inside her like darting flames.”

Soon afterward, Deb realizes she is being followed—someone seen out of the corner of the eye, the front yard gate left open when she know it was shut, odd little incidents at first dismissed but still suspicious.

While cleaning out her husband’s things, Cessy finds an envelope containing a flash drive stapled to the bottom of a drawer. It contains pictures of what looks like the murders of six men, with Hector as the killer.

Shortly after Grant’s funeral, Deb is visited by Levi Price, an FBI agent.

“Your husband wasn’t killed in a robbery. He was under investigation by the FBI.”

Grant was being blackmailed by a prostitute, as were the other men who were killed. The Bureau believes another prostitute is killing Maria Vasquez’s clients.

Cessy is confronted by a man who says Hector owed him $15,000, and now that debt is Cessy’s to pay back.

Deb discovers Grant had liquidated all their assets to pay Maria. She and her daughter are now basically penniless. She arranges to meet Maria, who promises to give her pertinent names, but is killed before she can do so.

Cessy leaves town, returning to her home where she re-connects with her brother, Chris, a likeable psychopath. It was because of Chris’ nonchalant method of doing away with some of their own mother’s “clients” that Cessy left home. She asks Chris for help.

Together, they backtrack Hector’s movements and in doing so, meet Deb Thomas. Aided by Chris, the two women join forces , and together stumble upon the truth. There is no killer prostitute, instead there’s a conspiracy involving law enforcement higher-ups, the very people investigating their husbands’ murders, the men supposed to be enforcing the law. Even Agent Price, who’s been such a comfort to Deb, may be involved.

They also learn the name of the man behind it all, a man who rationalizes all the killings:

“Grant, because he threated to inform the authorities, in a misguided effort to help a prostitute; Hector, because he’d splashed in so much blood he grown repulsed and wanted to flee. He’d built a business based on the unreliability of other men, and like any scheme built on greed and lust, it had worked perfectly.”

When Deb’s daughter is abducted, Deb and Cessy go straight to the source, and put themselves in more danger they realize.

Who can you turn to for help when the very people who should be protecting you are the ones putting you in danger?

This is definitely a very dark and intense, as well as tense, novel, exploring the corrupt side of the law and how the perseverance of the victims’ widows brings about its downfall. Told through the viewpoints of Deb and Cessy, it give two aspects of the same crime as seen by one woman who loved her husband and another who hated hers. Both women have to come to terms with the fact that their men were involved, one accidentally, the other deliberately, in something that was, to use a cliché, “bigger than both of them.”

At first, Deb is overwhelmed by the tragedy, while after the initial euphoria that she’s free of Hector settles, Cessy realizes that by dying, Hector has put her in an even more tenuous position. Both rally in their own way, however, and by the time they meet, they are ready to join forces and see everything through to the deadly end.

In They’re Gone, the “weaker sex” is by no means weak. At all.