They May Not Mean To, But They Do: A Novel 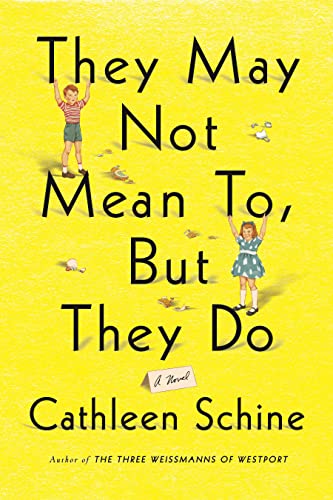 “Cathleen Schine has written a beautiful book that should be on every nightstand this summer.”

This challenges of aging and being part of the “sandwich generation” is the crux of Cathleen Schine’s newest novel, They May Not Mean To, But They Do. Joy, matriarch of the close-knit Bergman clan, is at one end of the generational ladder. At 86, she’s the sole caretaker of her husband, Aaron. She also holds down a job at a small NYC museum, with no hope of retirement in sight.

At the other end are her children, Molly and Daniel. Molly lives with her partner in California, Daniel with his family in NYC. Though they are both very close to their parents, the challenges of their own lives often preclude physical closeness. In their gentle neglect, they reassure themselves and each other that their parents are strong, their mother “a trooper.”

Those assumptions are challenged when Aaron’s condition worsens, and his cancer care issues are exacerbated by dementia. Molly and Daniel struggle when their competing impulses to care for their parents and to let them take care of things on their own come into conflict. Events come to a head when Joy’s health begins to fail.

Schine has crafted a thoughtful picture of modern American life that is sure to resonate with many readers. Aging can be hell, she reports, and the novel is replete with moments both uncomfortable and tragic. Joy is a powerhouse matriarch, and she fights tooth and nail to be allowed to live her life with dignity in her own home. Even when Aaron’s care becomes too much, even when he regularly loses track of conversations and makes terrible messes with his colostomy bag, she asserts her ability to make decisions for herself and for her husband, “though how she longed to complain sometimes, to let loose and curse the gods.”

Those moments often teem with dark humor. This is not a “hilarious” novel, despite what the promotional material says, but it is not without scenes of lightness and laughter. Schine has done a marvelous job of depicting real life, and the humor that can be found in horror.

Joy is a strong, real person; she laughs often and long to chase away the darkness that could easily envelop her. Her aging is replete with insults to her dignity, so her moments of triumph are formidable. Whether letting an embarrassing mistake stand in a professional report that had been taken away from her or madly riding her adult tricycle to save her small dog, the reader cheers for her. A late season romance late in the novel is charming and uplifts Joy’s future past the scope of the book.

Schine accentuates Joy’s struggles with side stories from the perspective of her children and oldest grandson. Molly and Daniel, as part of the sandwich generation, are regularly called upon to deal with parents who are ill, yet obstinately determined to stay in their NYC apartment.

Each sibling deals with events in his or her own way, not altogether successfully, but with great love. In light of the modern social conversation about female roles, each family member’s determination that more is to be expected from Molly than from Daniel is disheartening; it will also likely ring true to female readers.

A side story about Maggie’s partner’s father is less successful. Though he has his own aging issues, most feel repetitive with those of Joy and Aaron. Maybe this is meant to indicate that everyone has these issues, but he is not drawn clearly enough or his story different enough from Joy’s to provide the counterpoint that would be effective.

Daniel’s daughter’s religious awakening, too, drags; perhaps if Aaron or Joy were observant Jews (or militantly non-observant) it might have created a point of conflict. As is, it feels cobbled together only to give Joy a reason to finally stand up for herself to her daughter and son. These two storylines slow the forward momentum of the story, but they are not enough to drag the novel down too much.

There are important messages to be found about the meaning of family, gender roles, religious identity, and independence in a person’s sunset years in They May Not Mean To, But They Do. There is also a wealth of realistic dialogue and inner monologue, rich characterization, and a strong emphasis on finding the funny in life. Cathleen Schine has written a beautiful book that should be on every nightstand this summer.