They Fight Like Soldiers, They Die Like Children: The Global Quest to Eradicate the Use of Child Soldiers 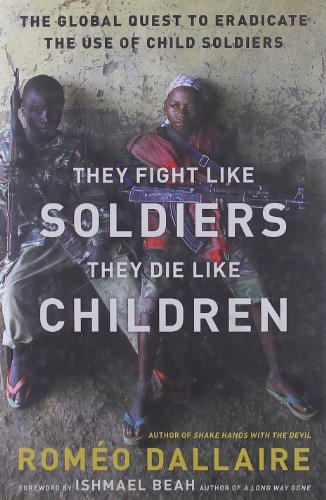 “. . . one of the hardest books you will ever read because it is so devastating and harsh and truthful, . . .”

In areas of Latin America, Asia, Africa, and the Middle East it is common practice to lure children into the horrific business of war by using rape, murder, fear, drugs, and kidnapping as tools to keep the machine well oiled.

They Fight Like Soldiers, They Die Like Children is an unflinching look at the harshness of the inhumane practice of turning children into killing machines. It is one of the hardest books you will ever read because it is so devastating and harsh and truthful, detailing atrocities committed to girls and boys as young as six and seven, raped and drugged, tricked into murdering. They Fight Like Soldiers should inspire many to act on the suggestions toward the end of the book about how to end this global practice.

The story begins in Africa—not surprisingly, since much of the book has been taken from Lieutenant-General Roméo Dallaire’s global peace-keeping missions. There is a moving introduction by Ishmael Beah, author of A Long Way Gone, himself a child soldier for many years and then the book moves into a slightly cumbersome stretch in which Lieutenant-General Dallaire outlines his purpose with the book and what is to be expected from each step along the way.

There is some background on Lieutenant-General Dallaire’s youth spent in Quebec. He is the son of a retired Canadian staff sergeant serving in the Canadian Army. His father, he says, suffered what would now be called post-traumatic stress disorder. There is interesting background here that reads like a memoir of Lieutenant-General Dallaire’s youth. A chapter dubbed Warrior Boy illustrates how he grew into the young man who would eventually become perhaps Canada’s best known peacekeeper. This Canadian idyllic life of the young Dallaire, while not perfect, appears to be almost absurd in its privilege when juxtaposed against the chapter that follows, Kidom.

Kidom is almost a children’s bedtime story when it begins. It is about a brother and sister in Africa playing and imagining, watching the world and nature unfold around them quietly and happily with a childlike sense of wonder. (It is pointed out early on that the characters in this section are composites but rooted in reality.) This portion of the book is the most powerful, devastating, and heart-wrenching bit. It is told, at first, with something that leans heavily into the territory of magical realism as in a Gabriel Garcia Márquez novel.

But by the end of the arc that is Kidom, your heart will be ripped out, graphically sliced into two. While it is understandable why this book was written in this way, this chapter might have stood alone. Kidom is so gripping, well written, emotional, and raw that it might have been a fictional novel on its own. In fact, as hard as it was to read, it would have been literary genius if the author had sustained that story throughout. “I lay down on my belly in the soft dust, and with my chin cupped in my palms and watched a little sandfly struggle over the uneven ground. Why was he walking? If I had wings I’d always fly.”

But Kidom ends on the saddest of notes and on with more historical fact, as witnessed by author Dallaire. It also delves deeply into some of the humanitarian work and research being done around the world to understand the problem and seek out a solution.

Chapter Eight winds back around to the story that was started in the section Kidom. In this chapter, though, a fictional peacekeeper reacts to threat of death by killing a child soldier, and Lieutenant-General Dallaire fictionalizes how that is experienced by a soldier.

This is Roméo Dallaire’s second book. Shake Hands with the Devil: The Failure of Humanity in Rwanda is the retired Lieutenant-General’s first book, which also won the Governor General’s Literary Award in Canada. Shake Hands was acclaimed around the world and was also turned into an Emmy Award-winning documentary and a feature film. Lieutenant-General Dallaire served 37 years with the Canadian Armed Forces and now sits in the Canadian senate.

In the end, They Fight Like Soldiers, They Die Like Children is hopeful. Lieutenant General Dallaire somehow, despite the atrocities he has seen in his time promoting peacekeeping efforts in such areas as Rwanda, retains optimism. “I believe we will eventually be able to do what the Lloyd Axworthys of the world did with land mines in the 1990s. There was a day when landmines were part of the available arsenal of tools one could use in warfare. The international movement, which roused public and media support around the world, led to a ban that took this weapon completely out of the inventories or arsenals of most nations.”

We can only hope he is right.