They Didn't See Us Coming: The Hidden History of Feminism in the Nineties 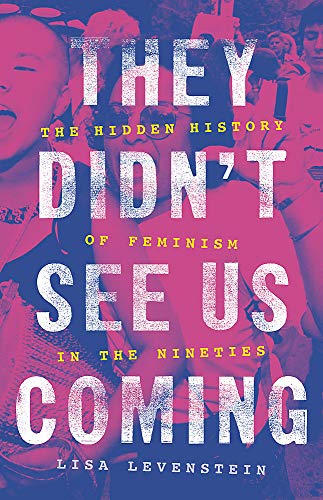 “They Didn’t See Us Coming is a working guide on how to create social change.”

It’s no surprise there are a plethora of new books on feminism during the era of the presidential crotch-grabber, but Levenstein illuminates groundbreaking efforts tht have been ongoing for decades that inform current national policy and electoral decisions. They Didn’t See Us Coming: The Hidden History of Feminism in the Nineties is a map to the women and their organizations that are changing the way we think, not just in the US but globally. To emphasize the global reach many other nations are further ahead in their equity for women than the US, as revealed in multiple UN Conferences on Women cited in the text.

In August 1995, the fourth World Conference on Women was in Beijing and to say the least, the Chinese were not ready for them. Many women with disabilities attended and found themselves barred from elevators or relegated to facilities completely lacking in such accommodations. After a dismal attempt by Chinese maintenance workers to carry women in wheelchairs down the stairs, “those who could walk without assistance, teamed up and carried the others down the steps. The rest of them got out of their chairs and crawled down.” The sight of dozens of women crawling down a stairwell to attend the conference is jarring and inspiring to read, one can only imagine how it was to witness; television cameras were there recording.

“Whirlwind Wheelchair set up a welding shop at a tent at the same 1995 conference and built a wheelchair from scratch out of old bicycle parts.”

Don’t be deterred by the rash of acronyms, SNEEJ, SONG, INCITE, DWU, SEIU, because they are all part of the tapestry that weaves the path for women’s rights in the current moment. Sistersong, an activist organization for women of color, is a favorite. As black feminist Bell Hooks observed, “to be in the margin is to be part of the whole but outside the main body.”

“Sistersong and SONG grew out of the margins of feminism, part of it but not of it, “perceived as a largely white, university educated female movement.” Sistersong Women of Color Reproductive Justice Collective, focused on reproductive rights for women of color that differed from most white women primarily because so many women of color had to parent in unsafe communities. It was Black women who moved the conversation from to-have or not-to-have children to encompass a community health perspective.

INCITE, a black feminist organization targeted the elimination of violence toward all women including lesbians and transsexuals. Their advocacy focused on changing laws for domestic abuse, increasing public awareness of police violence toward women of color, and healthcare reforms. INCITE helped organize demonstrations against the no-weapons-of-mass-destruction-war in Iraq. It is not a great leap to say that INCITE was the proving ground for the now famous Black Lives Matter Movement.

Reproductive rights through NARAL and NOW are the most well-known, but a number of other feminist groups linked reproductive control to economic equity, expanding the issue from one of control-of-our-bodies to control of our lives. Being able to decide when and the number of children to bear is a critical financial decision. “Women of color called on leaders to broaden the scope of protest beyond abortion and to highlight the multifaceted struggles to exert bodily autonomy experienced by women who were not white or middle-class.”

To many of us, Barack Obama’s experience as a community organizer in Chicago was mystifying as a presidential training ground, but Levenstein reveals why activism and the respective connections can imbue social change decades later. Alexandria O’Casio Cortez is another example of a community activist who has a national focus as a Congresswoman from New York. Community activism would seem to be the perfect training ground for getting elected to public office. They Didn’t See Us Coming is a working guide on how to create social change.