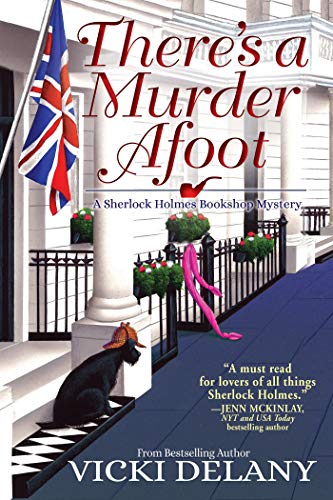 “Released on the day of Holmes’ 166th birthday, this book is for any reader who likes Sherlock Holmes, whether a dyed-in-the-wool devotee of the Great Detective or merely having a passing acquaintance.”

Gemma Doyle, owner of the Sherlock Holmes Bookshop and Emporium in West London, Massachusetts, has returned to London, England, for a conference on “Sherlock Holmes in the Modern World.” Coming with her are a group of close friends, Donald Morris, Grant Thompson, Jayne Wilson, and Ryan Ashburton.

Ryan’s also a police officer back in the States, and this is a chance for him to spend some time with Gemma.

Everyone has barely settled in when a man selling artwork at the conference begins an altercation with Gemma’s father, followed by a conversation filled with veiled threats. When Gemma demands an explanation, Henry Doyle’s answer is a shock.

“He’s your mother’s younger brother. The black sheep of the family. I haven’t seen Randy since the night he stole your grandfather’s Constable painting.”

Uncle Randy has been making a living as a con man and art forger ever since, and Henry isn’t too happy that he’s now trying to wangle his way back into the family.

Randy has other people angry with him also. A woman accuses him of stealing the concept for the sketches he’s selling at the conference.

“All this was my idea. I made the original sketches.”—she turned and pointed at Randy who shrugged—“he went behind my back and stole them.”

A little later, Gemma is accosted by a man who tells her to deliver a message to Randy.

“You tell your uncle my people want what’s theirs.”

“What? I don’t know what you’re talking about.”

“You know. We saw you talking to him earlier, so we figured you’d be a good one to deliver the message. Tell him.”

Randy isn’t at his booth. In fact, he’s nowhere to be found until after Gemma’s speech when he appears as everyone gathers for a drink.

“He reached out a hand to my mother. My father knocked it aside. Randolph turned to face him, all the charm and fake friendliness fled.

“Stay away from my family,” my father said.”

Randy makes several more appearances in close proximity to Gemma’s party as they go pub-hopping and attending the remainder of the conference. There are more incidents, involving other people who very obviously like Uncle Randy even less than Henry does.

And then, it happens.

A waitress runs into the meeting room, and faints. Gemma goes to see what happened.

In the next room, “my uncle Randolph lay on the floor with a length of rope tied tightly around his neck. My father knelt beside him. His hands were on the rope.”

Henry claims he was trying to remove the rope, that someone else killed Randy. Scotland Yard is called in, and unfortunately for Henry, Detective Inspector Mortimer, the investigating officer, is an old rival and enemy who has long held a grudge against the former inspector.

“He and I have clashed before, more than once. We started on the force around the same time and even back then, he was sloppy and lazy. I rose through the ranks faster than he did and he never forgave me for it.”

“Would he frame you?” Pippa asked.

Though the evidence against Henry is circumstantial, Mortimer arrests Henry. He doesn’t investigate the other people Gemma and friends say were wronged by Randy or threatened him.

With that, Gemma decides to take matters into her own hands. It’s not the first time she’s solved a crime, so with Ryan and friends, she plans to do it again. This time, the stakes are much higher since it’s her own father who’s accused. In a little while, she’ll find herself involved with an art forgery ring and learn the story of a forger who’d finally decided to become law-abiding at the wrong time.

With its many references to Sherlock Holmes, this novel is a fun read. The characters are well-fleshed out and not merely two-dimensional inserts acting simply as foils for the heroine’s machinations. Each has a definite part in bringing the killer to justice, and several have their own backstories and subplots that are furthered during the story.

Released on the day of Holmes’ 166th birthday, this book is for any reader who likes Sherlock Holmes, whether a dyed-in-the-wool devotee of the Great Detective or merely having a passing acquaintance. There’s a Murder Afoot takes its title from Holmes’ famous and oft-quoted statement to Watson: “The game’s afoot.”