There Was A Country: A Personal History of Biafra 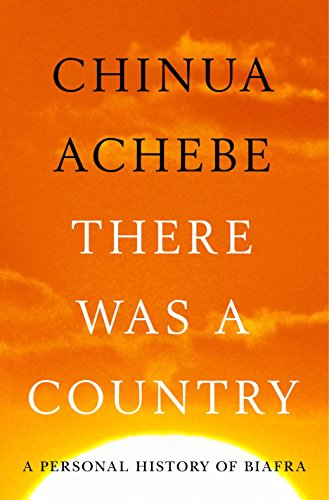 “. . . almost cinematic in its ability to go from an intimate scene to a great sweeping take of an army marching—without skipping a beat.”

The country of Nigeria is a basket case and has been for most of its independent existence. In this book, Chinua Achebe tries to explain why.

Ranked 14th for the past ten years on the Failed States Index (published by the Fund for Peace), Nigeria is racked by corruption, crime, and local rebellion. This is despite the fact that it is the eighth largest oil exporter in the world, and, incidentally, the fifth-largest exporter to the U.S., supplying nearly a tenth of our oil.

According to the Organization for Economic Cooperation and Development, the Nigerian economy continues to grow at about seven percent per year, largely thanks to oil exports on which it is almost entirely dependent.

“The economic growth has not cut poverty nor created necessary jobs. About two thirds of the population lives on less than 1 US dollar per day and the unemployment rate in 2011 was 23.9%, up from 21.1% in 2010. Unemployment in the 15–24 age group was 37.7%, and for 25–44 years, 22.4%. A major challenge for the economy is the dilapidated state of infrastructure and the over-dependence on the oil and gas industry. Corruption is widespread.”

In the 2011 Transparency International Corruption Perceptions Index, which measures perceived levels of public sector corruption, Nigeria was ranked 143 out of 183 countries.

For example, theft of up to 400,000 barrels of oil per day costs the government and oil companies about $1 billion per month. This has not prevented the government from setting up a Sovereign Wealth Fund of $1 billion, and to which the government plans to add $100 million per month. But skimming of oil revenues by state and government officials takes place before allocations to the fund, through another vehicle called the Excess Crude Account—the Financial Times explains that there is “little disclosure in spending” for this vehicle.

Yet Nigeria did not start out, 52 years ago, in such a mess. When the British pulled out, they left the country with a viable middle class, a working civil service, and a large, functioning education system. All of this might have led to the creation of a really great nation-state.

Chinua Achebe’s book was written to show how governance in Nigeria ran off the rails, largely through the civil war with Biafra. He wrote it in his old age, although he had written obliquely about the Biafran experience in poems earlier in his life. But now he feels the plain tale must be told: “It is for the sake of the future of Nigeria, for our children and grandchildren, that I feel it is important to tell Nigeria’s story, Biafra’s story, our story, my story.”

Achebe’s first novel, Things fall Apart, is a classic that has sold eight million copies and has been translated into several languages. It is considered the seminal novel of African literature. So it is not surprising that he has a powerful narrative style, one that is almost cinematic in its ability to go from an intimate scene to a great sweeping take of an army marching—without skipping a beat. This makes this book a pleasure to read, even if it does go from the sublime to the ridiculous from time to time.

Mr. Achebe starts out with a brief biography: Growing up in an Igbo village, but with a Christian father. He is educated by the British at a grammar school, then attends university, going on to work for the national broadcasting company. He recounts the story of the publication of his first novel—his literary career was nearly nipped in the bud by a careless typing service (how one forgets all these typing-related issues, which were quite real to us boomers back at the start, in these days of carbonite).

Nigeria gained its independence from the U.K. on October 1, 1960. Elections were held, but, as Achebe notes, they were rigged by the British government so that a compliant government dominated by the Northern region of the country would come in. Such intervention is well-documented.

Nonetheless, the Igbo, the people from the Eastern region of which Mr. Achebe is a native, were very active in the country’s civil service, having had a cultural predisposition for British education. When the British governing class left, it was largely replaced by the Igbo.

Nonetheless, “within six years of this tragic colonial manipulation (the rigging of the elections), Nigeria was a cesspool of corruption and misrule. Public servants helped themselves freely to the nation’s wealth. Judges and magistrates were manipulated by the politicians in power.”

In other words, the British imposed the rule of the Northern region on the country, using a corrupt electoral system, and this led to the widespread corruption that still exists today.

The Igbo civil servants might have played a role in cleaning up the system: nearly 45% of of the managers were of that tribe. In the Nigerian Port Authority, 70% of the posts were held by Igbo. But in January 1966, a military coup was followed on shortly by a pogrom against the Igbo: 30,000 civilians were slaughtered; more than 100,000 people were wounded or permanently injured.

This was not the result of wanton rioting, say Mr. Achebe, but “A detailed plan for mass killing was implemented by the government—the army, the police— the very people who were there to protect life and property. Not a single person has ever been punished for these crimes.”

After the pogrom, the remaining Igbo fled back to their native region in the East. That region seceded to become Biafra. Shortly after its secession, it was attacked by Nigeria. Cut off from the sea by the Nigerian army, the Biafrans died from starvation and disease. Nearly 3 million, mostly children, perished in the three years that the war lasted and the rebels were subdued.

Mr. Achebe tells the story in horrifying detail, both from his personal point of view, and from the perspective of a historian of the war. His own view is unique, in the sense that he lived through the conflict in Biafra, but as a diplomat for that country he traveled to meet with important leaders abroad like Leopold Senghor in Senegal, and members of the Nixon administration in the U.S. He has a view of the conflict from within and without the country.

But most importantly, he shows how the conflict put paid to any hope for Nigeria’s transitioning into a real, working democracy. The system installed during the military dictatorship before and during the war still governs the country. Currently, the state is so weak that an Islamic terrorist group called Boko Haram roams the northeast of the country, killing and torturing its victims. The Nigerian army has been completely ineffective against the group.

Chinua Achebe brings much more to the story than just the stark history. He brings in poetry, Igbo myth and religion, anecdotes of the artists and writers he grew up with in the country, and much discussion of the role of the writer in society.

The whole makes for a remarkable type of history, at once personal and objective. If one is at all interested in Africa, this book should not be missed.