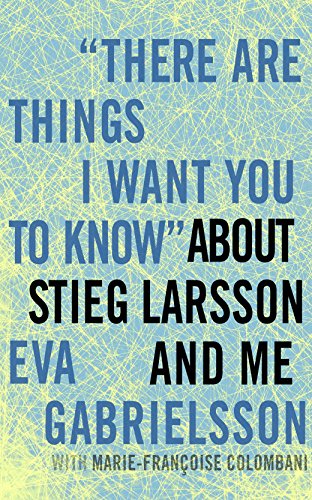 “In this book about one of THE MOST FAMOUS WRITERS ON EARTH (at the moment), you can find out how the late author took his coffee.

If Lisbeth Salander has held ransom over your life for the past few years, then you will want to snap up There Are Things I Want You to Know About Stieg Larsson and Me, by Eva Gabrielsson, the partner who lived with Stieg Larsson, the famous author for more than 32 years.

But if you were forced to read the popular novels The Girl with the Dragon Tattoo, The Girl Who Played with Fire, and The Girl Who Kicked the Hornet’s Nest in your book club, then you can probably take a pass.

Ms. Gabrielsson, a Swede, has cowritten her biography—with French writer Marie-Francoise Colombani, with a translation into English by Linda Cloverdale—so perhaps there were a few things lost in the communiqués.
Okay, maybe a lot of things.

This book is meant to be a tribute to the man Ms. Gabrielsson explains was her life partner, her soulmate, and her intellectual equal—Stieg Larsson—but it reads more like a Swedish pity party.

Not only does Ms. Gabrielsson want you to feel sorry for her because she didn’t inherit a boatload of money from Larsson after his sudden death (more about this later), but she is also angry at just about everyone who had any involvement in creating the books—including Mom and Dad Larsson.
Written in basic prose with way too many exclamation points, the book describes Larsson’s life story—with nothing more exciting to report than a Swedish meatball recipe.

Ms. Gabrielsson gives her take on her partner’s childhood and career, their life together, and the origin of the Millennium books, but really there is nothing very exciting in the pages of this book other than her constant hints that there is a fourth book hidden away called Guds hämd (English translation: God’s Revenge).

There are some short chapters that tackle issues, like “Addresses in the Millennium Trilogy,” which explains how Stieg came up with the novels’ locations, and “Sailing,” which expounds on . . . the couple’s love of sailing.

Again, there might have been something lost in translation.

Yes, there are a few interesting chapters scattered through this diminutive book, such as Ms. Gabrielsson’s account of Stieg’s death, but if you want to read an intriguing take on Larsson you might want to Google the December 2010 Larsson profile in Rolling Stone magazine by Nathaniel Rich.

In this book about one of THE MOST FAMOUS WRITERS ON EARTH (at the moment), you can find out how the late author took his coffee.

There are a lot of conspiracy theories in this book, but there are also some explanations of why Stieg was so empathetic toward woman, making his heroine such a kick-ass wonder woman, but it’s such a blip we never really get to the meat of the matter.