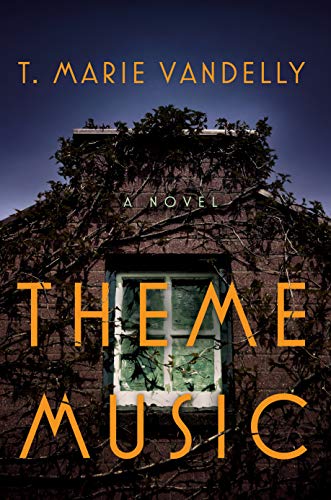 “Theme Music is more than compelling; it is mesmerizing . . .”

Theme Music should have a warning label. Readers, Beware: this is the scariest book since The Haunting of Hill House; do not read at bedtime or you may spend the night with the lights on and the covers over your head as you listen for footsteps and the ghostly laughter of dead children.

A combination of ghost story and mystery, horror and psychological thriller, T. Marie Vandelly’s debut novel delivers on its promise of scaring the bejesus out of the reader while at the same time leaving one wondering if the ghosts are the product of an unbalanced mind, or if that cold hand gripping your ankle is really that of a little boy who has been dead for 25 years.

Known in the press as “Baby Blue,” the only survivor of her family’s massacre, Dixie Wheeler was 18 months old when her father took an ax and gave his wife and three sons enough whacks to leave them horribly dead with body parts strewn around the kitchen.

“In my younger, darkest days, I believed that I had been spared to live a never-ending life of torment, one last act of cruelty before my father took a butcher knife from the kitchen drawer and dragged it across his throat.”

Dixie remembers nothing of the massacre, and her aunt tells her little until she is a third grader. She suffers blackouts and nightmares during the 25 years since the event, but manages to live a more or less normal life with a job and her boyfriend, Garrett.

But Dixie feels a need to connect with her dead family, to understand why her father suddenly turned into a monster, so when her old home comes on the market as a stigmatized property, she persuades Garrett to make an offer on the house before telling him its history. He refuses to finalize the sale when he learns its history.

“There’s no way I’m living in that house, Dixie.”

Celia’s husband, Ford, has a different reaction. “Let her buy it. Who cares . . . Maybe she needs to be there. Might be good for her. Exorcise some of her demons.”

Dixie leases the house and moves in without Garrett, who refuses to join her. She furnishes the house with the original furniture that her Uncle Davis, her father’s brother, had stored in his garage for the quarter century since the murders. The house becomes an eerie reproduction of the 1990s crime scene sans the blood and bodies.

Neither Garrett nor Aunt Celia understands why Dixie leases the property, and she doesn’t quite understand herself except that “It’s about me and my family. And I have to see it through, no matter how difficult it is.”

Part of Dixie’s need to understand her family tragedy lays in words her Uncle Davis told her. “Your father was a good man, Dixie . . . He didn’t do it, you hear? No matter what anyone tells you. Not Celia. Not nobody. Got It?”

Dixie gets it, but she doesn’t believe it. The police found no evidence that anyone else was in the house. No, her father was guilty. There is no other reasonable explanation.

Still, she remembers Uncle Davis’s other words from that long ago day of her cousin Leah’s funeral, years before he died of a heart attack. “He was set up . . . I don’t know who did it, but I’ve been working day and night to find out. I owe my brother that.”

Dixie finds the police file and Uncle Davis’s notes in an old desk she had included with her family’s furniture. She studies the crime scene photos in the police file, a horrific record of blood and core, her brother Eddie’s head resting next to the refrigerator, her mother missing her hands . . . but no photo of the ax. In fact, several photos are missing. Why?

She contacts retired Detective Cullins who had been in charge of the investigation, but he assures her that her father is guilty. There is no other explanation, but he doesn’t sound as certain as he should if he truly believed it.

As Dixie continues to study the crime scene photos, she believes she has found an anomaly. The neighbor boy, Rory, had discovered the murders and called the police after picking up the baby Dixie. But blood splatter suggests that Rory came in the front door, not the back door as he told the police. But why?

She tracks down Rory, her oldest brother’s friend, and on whom she had a crush as a teenager. Rory confesses he hid in her brother’s closet during the murders, frightened to death.

Dixie begins to believe her father might indeed have been set up, but by who? And whose voice does she hear in her head if not her father’s?

“When I was a child, my father sounded like Oscar the Grouch . . . When I was a teenager, he sounded like Jack Sparrow . . . Then one day he cleared his throat and took on what I imagined to be the voice of my father . . . He didn’t really sound like anyone, or anything, except maybe a bloated body calling to you from deep inside a well.”

The nightmares and visitations, objects moved from place to place, objects lost begin the first night Dixie stays at the house. Her father appears one night. “Get up, Deb . . . You’ve got a mess to clean up downstairs.”

Doors that won’t close, and adversely, doors that won’t open; the sound of running footsteps in the upstairs hall; the sound of a bowling ball—or Eddie’s head—rolling down the hall; a sticky kitchen floor where is no longer any blood—all sounds and appearances conspire to make Dixie doubt her own sanity. Then she learns a staggering truth that threatens to strip her of any rational thoughts remaining to her.

Realistic characters, a completely logical plot—if one disregards the ghosts—and a decades’-old murder mystery combine to create the most gripping and suspenseful debut novel of the year. Vandelly proves herself a master of confusing the reader as to whether Dixie actually sees ghosts or merely thinks she does. The tricks of one’s imagination are as frightening as any ghost.

Vandelly continues to tease the reader until the very end of the novel. When the mystery is solved, does Dixie still see ghosts? Some will prefer that the visitations at the conclusion be more subtle, leaving one wondering whether the ghosts are real—well, as real as ghosts can be—or just Dixie’s lingering wish that they are.

All in all, Theme Music is more than compelling; it is mesmerizing. Kudos to Vandelly.