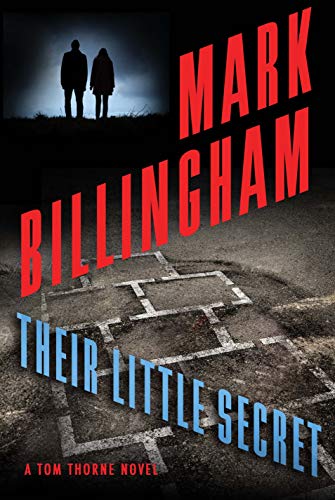 “reveals what a deft hand Billingham has at peeling away the different layers of a villain’s psyche to unmask what lies beneath.”

DI Tom Thorne, sometimes conflicted, sometimes guilt-ridden, but whose sense of something being off at a crime scene is generally spot on, is convinced there is more to the death of a woman who commits suicide by train than merely a desire to die.

“The questions thrown up by a suicide were often the ones that bothered Thorne the most, because, nine times out of ten, he was never going to find out the answers.”

Thorne being Thorne, he is determined to try regardless of push back from his boss, Detective Chief Inspector Brigstock. Thorne’s partner, Nicola Tanner, isn’t keen to work the case, either. After all, the victim, Philippa Goodwin, is a suicide, and there are lots of murders that need clearing up.

There is another reason Thorne is so determined. An interview with the victim’s sister, Mary Fulton, provides an answer to one of his questions. “So, not only can I tell you why my sister jumped in front of that train, I can tell you the name of the man who was responsible for it.”

Philippa Goodwin had been the victim of a conman, a smooth talker who defrauded her out of 75,000 pounds, then refused to take her calls or see her again. Depressed and humiliated Philippa jumps in front of a train, but Patrick Jennings, if that was the con artist’s real name, might just as well have pushed her.

As Brigstock points out to Thorne, Patrick Jennings is a matter for the fraud squad. “One phone call to ActionFraud and you’ve done yours…Do you want me to give you the number?”

No, Thorne doesn’t want the number; he wants a forensic team to go over Philippa Goodwin’s flat in the hope of finding fingerprints or DNA. He wants to unmask Patrick Jennings before he finds another victim to defraud and possibly drive to suicide.

While Thorne is persuading Brigstock to give him a few days to find Jennings, a young single mother named Sarah is meeting with other mothers at a coffee shop after dropping her six-year-old son at school. Sarah always brings her laptop and pretends to be working on a novel when not visiting with the other mothers. “She needs to be where they are.”

Then one morning an attractive man she’s sure she doesn’t know begins a conversation with her, and they exchange phone numbers. “My name’s Conrad, by the way.”

As the relationship between Sarah and Conrad heats up, so does Thorne’s search for the elusive Patrick Jennings. The forensic team finds his prints and DNA in Philippa’s flat. However, there is no match for either found in in the national data base. There’s also no record, criminal or otherwise, on Jennings. He might as well be a ghost.

Patrick Jennings is not a ghost even if he calls himself by another name. He’s not trying to defraud Sarah, either; in fact, Sarah has guessed what he is. “And it doesn’t matter. I swear, right this minute, I can’t think of anything I care about less.”

If Sarah has guessed Conrad’s secret, then he has guessed a far more puzzling secret about her. “I know that nobody plays with those toys out there in the kitchen.”

Thorne is frustrated not only by Philippa Goodwin’s case, but by his own domestic life. His partner, Helen, has asked him to move out, that they both need time and space. Thorne is back at his own flat, not certain he agrees with Helen, but not knowing what to do about it. He doesn’t feel at home in his old flat, but he doesn’t know how to make things right between Helen and himself. He feels like a mess privately and professionally.

There is always the job to save him from too much introspection. A call from Kent Serious Crime saves him from his personal melancholy and his professional doldrums. Peter Jennings’ DNA is a match to the DNA found on homicide victim in Kent. Jennings has escalated from conman to murderer.

But Philippa’s suicide by train, and a young man beaten to death, his body abandoned on a beach, can’t be connected in any logical, meaningful way except for DNA, or so convention wisdom says. What possible reason does a fraudster have for killing a young man and a poor one at that? Peter Jennings preys on women for money, and he doesn’t kill them.

DI Tom Thorne knows better. There is a link between Peter Jennings, poor dead Philippa, and the boy on the beach. All Tom Thorne has to do is find it.

Mark Billingham creates a very believable character in DI Tom Thorne, not too eccentric, but neither is he a by-the-book inspector. Thorne pushes the envelope when he feels it necessary to cut through the red tape to find a killer.

The setting is what one expects of an English police procedural: a wet, cold climate that leaves one reaching for a sweater in the middle of July.

Although the psychological twist is not quite as surprising as one might have hoped, it still reveals what a deft hand Billingham has at peeling away the different layers of a villain’s psyche to unmask what lies beneath.