Theater of Cruelty: Art, Film and the Shadows of War 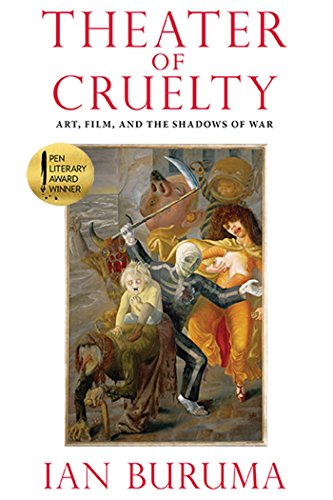 “As always Buruma is a reporter first; he does not argue a particular side without citation and witness. That is one aspect, along with skilled political scope, that sets him apart from other intellectual essayists today.”

Ian Buruma’s 2007 Murder in Amsterdam chronicles the murder of Dutch filmmaker Theo van Gogh, an artist and media provocateur, whose religious and political satire made him a target. In that work, Buruma examines the shifting sociopolitical landscape of Amsterdam and the culture collisions dividing a country known for diversity.

Buruma’s collection of essays Theater of Cruelty touches on many of these themes in examining what forces are operating that make masses of people commit barbarous acts and even genocide in the name of nationalism.

In “Fascinating Narcissism: Leni Riefenstahl” he dissects the dark artistic merits of Riefenstahl’s nationalist film Triumph of the Will which proved brilliant in its power to affect pro-Nazi hysteria among Germans. Outside of Hitler’s inner circle of officer thugs, this filmmaker was the only person who had a direct line to him. Hitler, without doubt, knew the power of propaganda in mainstream art. Riefenstahl not only got out before Germany was vanquished by the allies, she claimed she didn’t know about Hitler‘s crimes against humanity. Buruma dismantles her revisionist history one lie at a time.

In “The Joys and Perils of Victimhood,” Buruma takes on the volatile subject of groups co-opting persecution as it is manifests way after the fact. Like a good lawyer, he argues his points, clinically, if not completely persuasively.

Equally provocative is “The Afterlife of Anne Frank” in which the author takes on the exploitive aspects of the industry that was built around her iconic diary. Buruma asserts that she has been forever a Jewish martyr and the fact that she has been appropriated to post narratives that would be at odds with her beliefs is put forth in her writings.

“There’s no place like Heimat” examines the reactions of Germans in the aftermath of the war and the accommodation of collective guilt over the profound destruction and vileness perpetrated by the Third Reich. Buruma evaluates the conspiracies of silence and the bitter truths that German descendants have had to try to reconcile and permanently embrace.

In “Occupied Paris: The Sweet and the Cruel” Buruma surveys the artists, writers, and filmmakers who stayed in Paris during the Nazi occupation. Some were essentially double agents, assimilating the Vichy government and even socializing with Nazi officers in brothels, meanwhile stealthily using their particular talents for the resistance. In many cases there is a completely gray area, morally, that their rationale is simply one of survival. Buruma’s tale of the two realities of Paris during the Nazi Occupation—operating as if nothing was amiss while Jews were being brutally rounded up, starved, and sent off to camps. His portrait of writer and resistance fighter Helene Berr is a searing testament to her courage, humanity, and talent.

In “The Believer,” a cautionary tale of politics making strange bedfellows, Buruma tries to deconstruct why someone like Christopher Hitchens, his friend, would ally himself with George W. Bush’s disastrous Iraqi war policies.

Buruma describes the streetwise point of view of ongoing political turmoil in Gaza in “Robbed of Dreams,” in which he visits Israelis who are sympathetic to Palestinians and vice versa, but whose voices are drowned out in their official positions of their respective governments.

“Suicide for the Empire” contemplates the minds and hearts of Kamikaze pilots at the end of World War II. Many of them were top university students whose mission was beyond what they would physically destroy in the war, instead ending up what they would symbolize for a defeated nation. Buruma writes so powerfully of the psychology of what would be a passionate mission of patriotism—and its similarities and uniquely separate motivation from, say, suicide bombers.

Buruma knows art and art history and offers up a cluster of essays about artists including Max Beckman, George Grosz, and even R. Crumb (not all of the essays are directly looped into the book‘s thesis) and filmmakers Werner Herzog and Rainer Werner Fassbinder.

“Dressing for Success” is about the fascinating Fujita Tsuguharu, a Japanese expatriate artist who became a star artist and personality in Paris, but whoreturned to Japan and turned propagandist during WWII, only to switch sides again after Japan‘s defeat after the U.S. atomic bombings on Hiroshima and Nagasaki changed the global game forever.

As always Buruma is a reporter first; he does not argue a particular side without citation and witness. That is one aspect, along with skilled political scope, that sets him apart from other intellectual essayists today.