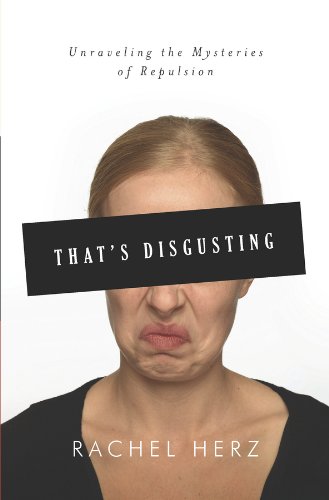 “Ms. Herz indeed proves her point about ‘benign masochism.’ We are disgusted by disgust. And we can’t stop reading about it.”

Who knew there was so much to say about disgust? So many causes, types, cultural differences, variations in brain structure, phobias, related diseases, and ways of expressing it—even different types of disgust for each of the five senses—all with connections to phenomena such as the Twilight movies, obesity, politics, Oscar Wilde, and even Woody Guthrie.

Rachel Herz, a psychologist and a professor at Brown University, has done impressive, wide-ranging research for this book. Her insights are thought-provoking in areas far beyond poop, pus, or other obvious manifestations of disgust, while at the same time That’s Disgusting is also a fun read, with tidbits that will make great pickup lines.

Did you know, for instance, that casu marzu, a popular cheese in Sardinia, is served with “actively squiggling” live fly larvae?

But to get to the good parts and coordinate everything into a coherent whole, readers will have to put up with two annoying—though not disgusting—problems: There’s no overview or structure laying out the basic themes; and That’s Disgusting is outrageously padded,

For instance, Ms. Herz tells us that as a child in Canada, she sang a modified version of the classic American folk song “This Land Is Your Land,” which, she helpfully points out, “is based on the old gospel hymn ‘Oh, My Loving Brother’” and has been “performed by Bob Dylan, Peter Paul and Mary, Bruce Springsteen, Dave Matthews, and the Counting Crows,” but of course was originally written by Woody Guthrie—who, she informs us, “was born on July 14, 1912, in Okemah, Oklahoma” and was married three times, fathering eight children, including the musician Arlo Guthrie—in the process incorrectly asserting that Woody, rather than Arlo, wrote the song “Alice’s Restaurant“—all so that she can get to the relevant fact that the elder Guthrie had Huntington’s disease, a condition in which sufferers don’t recognize the sense of disgust. Oh, so that’s where she was going.

The book’s main thesis seems to be that “The emotion of disgust emerged in humans to protect us from the problem of our death, both physically and psychologically, and this is why it motivates us to recoil from scabby sores, piggish eating, and people who threaten our way of life.” Humans are, Ms. Herz states, the longest living animals, “the only creatures who experience emotional disgust, and we are also the only creature that knows it will die.”

While disgust might not have protected our ancestors from rampaging saber-toothed tigers, it can forewarn us of fatal diseases—particularly those relating to food or infection: “putrid smells and tastes; slimy, oozy, red, brownish and yellowish sights; wriggly and wet touches; and squelching and retching noises.”

That thesis may sound straightforward enough, but there are multiple complications. And perhaps because of the book’s lack of structure, it doesn’t always reconcile these points.

Clearly, not all manifestations of disgust evolved to keep humans alive. As the book emphasizes, what we consider disgusting is heavily influenced by our culture. This is particularly true of food—remember that Sardinian cheese?—in part because it comes from local plants and animals that residents have eaten for generations but outsiders haven’t. So even though fly larvae may disgust non-Sardinians, presumably it won’t kill us.

On the other hand, people too often are irrationally repulsed by things that can’t hurt them, while blithely touching and grabbing things that could. In that case, our sense of disgust would actually be endangering us.

Who, for example, would hesitate to take money out of an ATM machine? And who would possibly lick a public toilet seat?

Well, contends Ms. Herz, “You’re far likelier to catch something nasty, including staphylococci infections which can cause meningitis, or viruses like the swine flu, from your phone, the lunchroom computer, or by using your local ATM than you would be if you licked the toilet seat in a movie theater restroom.” That’s because “People pick their noses, cough into their hands, touch all kinds of dirty things and then punch in their PINs” on the ATM. Meanwhile, the concept of a toilet seat seems disgusting, because it reminds us of excrement.

Ms. Herz also expands into areas a reader might not usually include under the rubric of “disgusting”—what she refers to as “moral disgust”—such as “the rich politician who pilfers money intended for an after-school program to renovate his mansion.” She acknowledges that there is some debate among researchers about whether this really evokes disgust or some other emotion, like anger. Still, she ties it back to the way classic disgust protects the body against the threat of disease, pointing out that “moral revulsion is a social emotion that motivates us to reject impure and corrupt people who threaten our social and spiritual welfare.”

In the end, as the book piles on example after example—strings of Japanese fermented soybeans, the board game “Totally Gross,” a case of consensual homoerotic cannibalism in Germany—Ms. Herz indeed proves her point about “benign masochism.” We are disgusted by disgust. And we can’t stop reading about it.